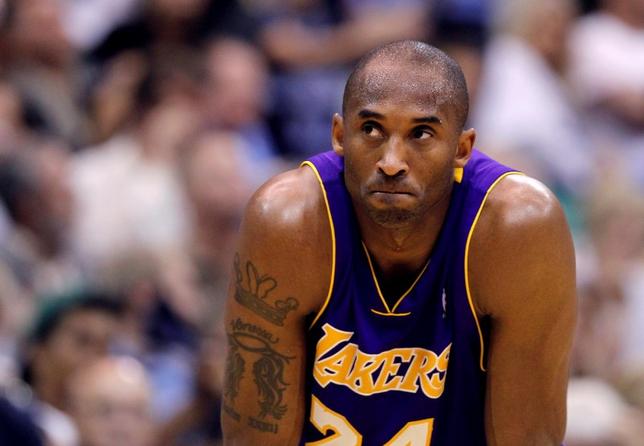 Fomer Los Angeles Lakers guard Kobe Bryant pauses during a break in playing against the Utah Jazz during Game 4 of their NBA Western Conference semi-final playoff series in Salt Lake City, Utah, in this file May 10, 2010 photo.

The maker of the popular NBA 2K video game series on Tuesday won the dismissal of a potentially large damages claim in a lawsuit over its depiction of tattoos belonging to LeBron James, Kobe Bryant and other National Basketball Association stars.

U.S. District Judge Laura Taylor Swain in Manhattan said Take-Two Interactive Software Inc cannot be held liable to the plaintiff Solid Oak Sketches LLC for statutory damages of as much as $150,000 per copyright infringement, a sum that in theory could reach billions of dollars.

The works includes the words “Hold My Own” on James’ left bicep, butterflies on Bryant’s right bicep, and designs on the bodies of Eric Bledsoe, DeAndre Jordan and Kenyon Martin.

Take-Two has said it sold more than 4 million copies of NBA 2K16 in the first week after its release last Sept. 29.

Swain said U.S. copyright law imposed a “bright-line” rule precluding recovery of statutory damages when the first of a series of infringements occurred before the works in question are registered with the U.S. Copyright Office.

The judge said Solid Oak’s 2015 registration came two years after Take Two’s alleged first infringement when it released NBA 2K14, and that it did not matter that the game has been updated.

“When the same defendant infringes on the same protected work in the same manner as it did prior to the work’s registration, the postregistration infringement constitutes the continuation of a series of ongoing infringements,” she wrote.

Darren Heitner, a lawyer for Solid Oak, said in an interview: “The case will proceed, and we look forward to explaining why we are entitled to actual damages.”

A Take-Two spokesman said the company does not in practice comment on legal matters.

Bryant and Martin have retired from NBA.