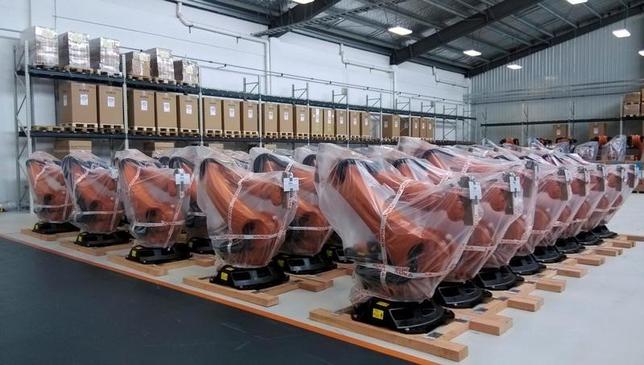 Robots covered in plastic sheets are seen at a plant of Kuka Robotics in Shanghai, China August 13, 2014.

China is aiming for a top-10 ranking in automation for its industries by 2020 by putting more robots in its factories, the International Federation of Robotics (IFR) said.

China’s push to modernize its manufacturing with robotics is partly a response to labor shortages and fast-rising wages.

But the world’s second-largest economy still has far lower robot penetration than other big industrialized economies – just 36 per 10,000 manufacturing workers in 2015, ranking it 28th among the world’s most automated nations.

By 2020, it aims to boost penetration to 150 per 10,000 workers, IFR said in a statement, citing Wang Ruixiang, President of the China Machinery Industry Federation.

To help reach that goal, China aims for sales of 100,000 domestically produced industrial robots a year by 2020, up 49 percent compared with last year, the IFR said in a statement at an industry summit in Shanghai, where the Chinese federation’s chief was speaking.

The Chinese market is still dominated by foreign robot makers like ABB, Kuka and Yaskawa, but domestic robot makers making inroads and increased their market share to 31 percent from 25 percent in 2013, the IFR has said.

And China’s Weichai Power raised its stake in German forklift truck maker Kion, which among other products offers warehouse automation, to 40 percent this week.