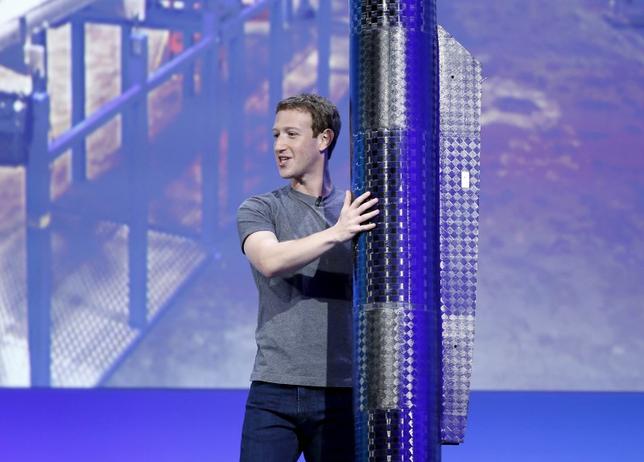 Facebook CEO Mark Zuckerberg holds a propeller pod of the solar-powered Aquila drone on stage during a keynote at the Facebook F8 conference in San Francisco, California April 12, 2016. Facebook Inc said July 21, 2016, it had completed a successful test flight of a…

Facebook Inc (FB.O) said on Thursday it had completed a successful test flight of a solar-powered drone that it hopes will help it extend internet connectivity to every corner of the planet.

Aquila, Facebook’s lightweight, high-altitude aircraft, flew at a few thousand feet for 96 minutes in Yuma, Arizona, Chief Executive Mark Zuckerberg wrote in a post on his Facebook page. The company ultimately hopes to have a fleet of Aquilas that can fly for at least three months at a time at 60,000 feet (18,290 meters) and communicate with each other to deliver internet access.

Google parent Alphabet Inc (GOOGL.O) has also poured money into delivering internet access to under served areas through Project Loon, which aims to use a network of high-altitude balloons to made the internet available to remote parts of the world.

Yael Maguire, Facebook’s engineering director and head of its Connectivity Lab, said in an interview that the company initially hoped Aquila would fly for 30 minutes.

“We’re thrilled about what happened with our first flight,” Maguire said. “There are still a lot of technical challenges that need to be addressed for us to achieve the whole mission.” He said he hoped the system might be brought into service “in the near future.”

Zuckerberg laid out the company’s biggest challenges in flying a fleet of Aquilas, including making the plane lighter so it can fly for longer periods, getting it to fly at 60,000 feet and creating communications networks that allow it to rapidly transfer data and accurately beam down lasers to provide internet connections.

Maguire said Aquila will go through several more test flights and hopes it will soon break the world record for the longest solar-powered unmanned aircraft flight, which currently stands at two weeks.

Facebook, which has more than 1.6 billion users, has invested billions of dollars in getting more people online, both through an initiative called internet.org – which offers a pared-down version of the internet to poor areas – and by building drones.