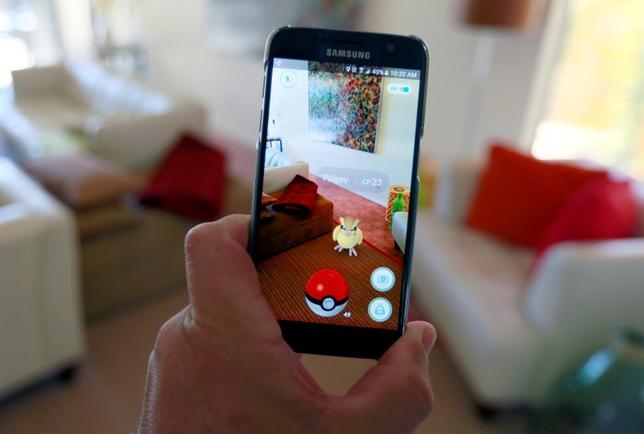 Electronics and smart-phone retailers are seeing a jump in sales of mobile charging equipment since Pokemon GO was released in the United States two weeks ago and are now looking for more ways to drive potential customers into stores through the wildly popular game.

AT&T Inc (T.N), GameStop Corp (GME.N) and RadioShack are all seeing a bump in sales of mobile chargers and in some cases charging cases since the game went live on July 6, with GameStop reporting a 45 percent jump in sales and Radio Shack seeing a 50 percent increase, executives told Reuters.

Encouraged by the early boost in sales, the retailers are using social media, free charging stations, and even old-fashioned lemonade stands to draw nearby gamers into their stores.

The augmented reality game from Japan’s Nintendo Co Ltd (7974.T), where players walk around real-life neighborhoods to hunt down virtual cartoon characters visible only on their smartphone screens, had more than 65 million users in the U.S. just seven days after it debuted.

While the game is not yet open to consumer brands looking to advertise in alternate reality, GameStop, RadioShack and Sprint Corp (S.N) are finding ways to capitalize on the frenzy around the game to get players into their stores. It’s no small feat at a time when brick and mortar retailers are struggling to compete with the likes of Amazon.com Inc (AMZN.O).

For retailers like RadioShack, which has been testing beacons in some stores to send passersby texts about a promotion, Pokemon could present an alternative, said Michael Tatelman, RadioShack’s chief revenue and marketing officer.

The question, however, is will the frenzy last, Tatelman asked.

“There is something great about ‘go in and chase this monster into your store,'” he said. “The question is will it stay compelling,” said Tatelman.

To take advantage of the Pokemon Go craze, RadioShack, which sold some of its stores to hedge fund Standard General after filing for bankruptcy in 2015, has used social media, including Facebook, to promote specials on mobile chargers since the game has a tendency to use up power quickly.

Sprint, which is also discounting chargers, has sent out training literature to its associates so that each of its 2,000 stores in the U.S. has a “Pokemon Go Expert” who can help beginner players understand the game.

Its store managers have taken matters into their own hands, in some instances setting up lemonade stands at “Poke Stops,” located near Sprint stores. “Poke Stops” are randomly selected spots where gamers grab new Pokemon balls to increase their level of power within their game.

An hour after Sprint tweeted that one store in Louisville, Kentucky, was a Poke Stop, a busload of children and parents showed up to catch Pokemon and buy accessories, said Katey Chamblin, director of sales operations at Sprint.

GameStop, which sells Pokemon gear as well as video games, posted on its Web site a list of its stores which are Poke Stops and Poke Gyms, where players can train and battle their Pokemon, said Eric Bright, director of merchandising at GameStop. Poke Gym, like Poke Stops, are locations that are determined by the game’s programmers.

Additionally, the retailer purchased Pokecoins in the app to cash in for “lures” to attract Pokemon to 50 of its stores and is doing so again this weekend.

In August, GameStop will offer limited inventories of a Pokemon bracelet, which vibrates when the wearer is near a monster. GameStop’s pre-ordered bracelets, which retail for about $40, sold out even before the game went live and now are available on eBay for more than $100, the company said.

Shares of GameStop are up 14 percent since July 6, when Pokemon Go debuted, while shares of AT&T are down 1 percent and Sprint shares are up 1 percent.