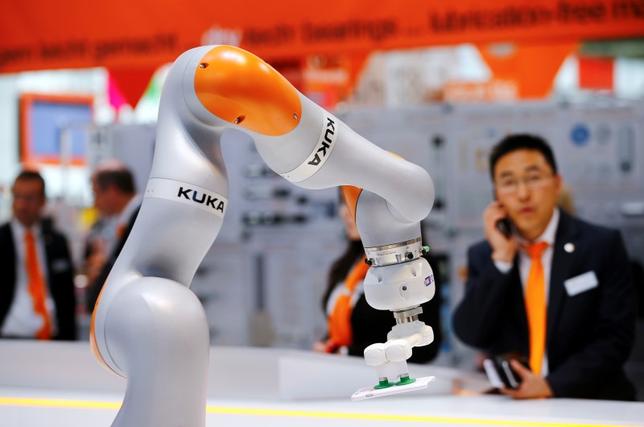 A robot arm of German industrial robot maker Kuka is pictured at the company’s stand during the Hannover Fair in Hanover, Germany, April 25, 2016.

Kuka already sells 25 to 30 percent of its robots in China, Stefan Lampa said on Wednesday, adding it was essential to have research and development centers there for the local market, as the German firm has had for the past year-and-a-half.

China, whose government has made the automation of manufacturing a top priority, is the world’s biggest industrial robot market, although growth in robot demand there slowed to 17 percent last year from 56 percent a year earlier.

“China is a super-important market in robotics. Having an owner that comes from that market most probably will be beneficial for us or for whoever has a Chinese owner,” Lampa told Reuters in an interview.

Kuka’s chief executive Till Reuter has welcomed Midea’s bid, the largest yet by a Chinese buyer for a German company, but has yet to make an official recommendation to shareholders.

Meanwhile, Kuka’s supervisory board has given him a free hand in negotiating with Midea, sources told Reuters on Tuesday, over potential points of contention such as guarantees to protect jobs and intellectual property.

Robots are increasingly being used in factories and also for tasks such as personal care or surgery. Kuka’s robotics sales last year totaled 910 million euros, and Lampa said Chinese growth was in a different league to other markets.

Kuka is expanding into electronics and other sectors but still makes the lion’s share of its revenues in automotive.

“If you try to do it far away you don’t have time,” Lampa said, adding that robots for the Chinese market had to be simpler than for other markets because there was a layer of technical expertise missing in factories.

“All of those people will disappear in China because everyone who can afford it wants their kids to be engineers or get high university degrees,” he said, whereas in Germany skilled workers would welcome a complicated robot.

“In China, you have to think different,” he said. “We need to utilize the blue-collar workforce to interact with the robot, and that development work has to be done in China.”

Lampa said Chinese demand growth should be sustainable, partly because electronics assembly was still offshored to manual workers in lower-cost countries such as Vietnam or Bangladesh, and would become automated as wages there rose too.

Fears about the impact of robots on employment prompted a draft motion to the European Parliament last month saying robots’ growing intelligence, pervasiveness and autonomy requires a rethink of everything from taxation to legal liability.