Foxconn to close some of Sharp’s overseas ops, hasten patents to market 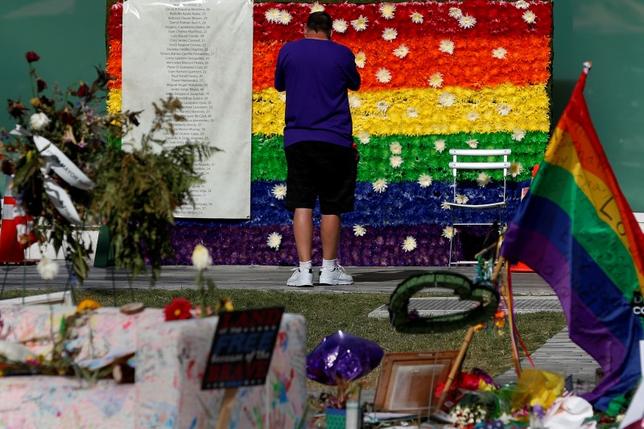 A man pays respect at a rainbow flower wall as part of the makeshift memorial for the Pulse nightclub mass shooting victims last week in Orlando, Florida, U.S., June 21, 2016.

The U.S. Senate on Wednesday is likely to pass a Republican-backed proposal to expand the Federal Bureau of Investigation’s secretive surveillance powers after the mass shooting at an Orlando gay nightclub last week.

The spying bill is the Republican response to the massacre after a push for gun-control measures sponsored by both major U.S. parties failed earlier this week.

The legislation would broaden the type of telephone and internet records the FBI could request from companies like Alphabet Inc and Verizon without a warrant. The proposal met opposition from critics who said it threatened civil liberties and did little to improve national security.

The bill, which the Obama administration has sought for years, “will allow the FBI to collect the dots so they can connect the dots, and that’s been the biggest problem that they’ve had in identifying these homegrown, radicalized terrorists,’” Senator John Cornyn, the chamber’s No. 2 Republican, said Tuesday.

The vote also represents a bi-partisan drift away from policy positions that favored digital privacy, which had taken hold in the three years since former National Security Agency contractor Edward Snowden revealed the breadth of government surveillance programs.

The post-Snowden moves included the most substantial reforms to the U.S. intelligence community since the Sept. 11, 2001, attacks, and a refusal to heed the FBI’s call for laws that would undermine encryption.

It is unclear if the House would pass the Senate proposal, given its alliance between libertarian-leaning Republicans and tech-friendly Democrats that has blocked past efforts to expand surveillance.

The legislation before the Senate Wednesday, filed as an amendment to a criminal justice funding bill, would widen the FBI’s authority to use so-called National Security Letters, which do not require a warrant and whose very existence is usually a secret.

Such letters can currently compel a company to hand over a user’s phone billing records. Under the Senate’s change they could demand electronic communications transaction records such as time stamps of emails and the emails’ senders and recipients, in addition to some information about websites a person visits.

The legislation would also make permanent a provision of the USA Patriot Act that allows the intelligence community to conduct surveillance on “lone wolf” suspects who do not have confirmed ties to a foreign terrorist group. That provision, which the Justice Department said last year had never been used, is currently set to expire in December 2019.

Senator Ron Wyden, an Oregon Democrat, criticized Senate Republicans for “pushing fake, knee-jerk solutions that will do nothing to prevent mass shootings or terrorist attacks.”

Though Republicans invoked the Orlando shooting in support of the bill, FBI Director James Comey has said Mateen’s transactional records were fully reviewed by authorities who investigated him twice for possible extremist ties.

Comey said there was “no indication” Mateen belonged to any extremist group and that it was unlikely authorities could have done anything differently to prevent the attack.