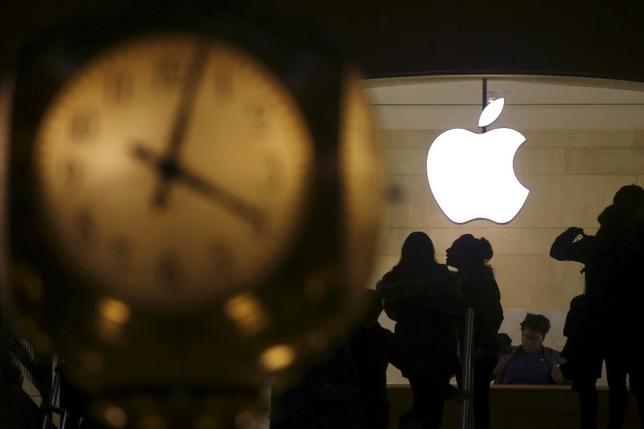 The Apple logo is pictured behind the clock at Grand Central Terminal in the Manhattan borough of New York, February 21, 2016.

After dropping more than $200 billion in market capitalization in one year, Apple shares could fall further as they are set to lose their weighting and be reclassified in the annual reconstitution of the widely followed Russell indexes.

When all is said and done, about $1.3 billion more will be sold in Apple Inc (AAPL.O) shares at the market close on Friday, when the reconstitution of the Russell indexes takes effect, according to an analysis by Credit Suisse. (Graphic: here)

Because Apple has been aggressively buying back and retiring its stock, outstanding shares have dropped to less than 5.5 billion from 5.8 billion in late June 2015, when the Russell indexes were last recalibrated, according to Reuters data.

Apple’s weighting in the Russell 1000 .RUI will roughly fall to 2.52 percent from 2.77 percent, Credit Suisse said. The decline is due to the combination of fewer shares outstanding and Apple’s smaller part of the index’s capitalization.

The performance of a market-weighted index is more influenced by larger companies, like Apple.

With the changes, fund managers who are pegged to the index, including exchange-traded funds, will have to sell the stock to match the new, lower weighting.

Roughly $96 billion in U.S. fund assets are benchmarked directly to the Russell 1000, according to a Reuters analysis of Morningstar Inc data. That compares to $2.2 trillion pegged globally to the S&P 500, according to S&P Dow Jones Indices.

Adding to the selling pressure, Apple will be classified as both a value and a growth company at Russell. After the close on Friday, 92 percent of Apple will be considered “growth” and 8 percent “value” according to index provider FTSE Russell, splitting it between two Russell subindexes.

The move matters because value managers that peg their investments to the Russell indexes will be buying Apple while growth managers will be selling. Because there are more assets benchmarked to growth than to value, there will be net selling of Apple, said Meera Krishnan, U.S. index strategist at Credit Suisse in New York.

She estimated there will be over $850 million of selling in Apple out of the growth component of the Russell 1000 and about $400 million of buying from the value side.

Almost 1,900 large-cap growth funds own Apple shares versus fewer than 1,000 large-cap value holders, according to Morningstar data to the end of May.

Growth funds had been shedding Apple stock since last year.

“Indices are moving to confirm what the market has already been saying, which is it is a growth and value stock,” said Graham Tanaka, portfolio manager of the Tanaka Growth Fund in New York. He said he has trimmed the fund’s Apple stake but it is still a “major holding.”

“The question is when and how Apple can reaccelerate their growth rate,” he said. “We’re playing the waiting game.”

This market perception was cemented in May when Warren Buffett’s Berkshire Hathaway Inc (BRKb.N) disclosed an investment of nearly $1 billion in Apple. Buffett’s investments usually favor strong balance sheets and management, characteristics of a value play, over heady growth prospects.

Apple’s shares are down 9 percent since late April when it reported results, including its first-ever decline in iPhone sales and first revenue drop in 13 years. Since its $133 closing high in February 2015, the stock has dropped 28 percent.