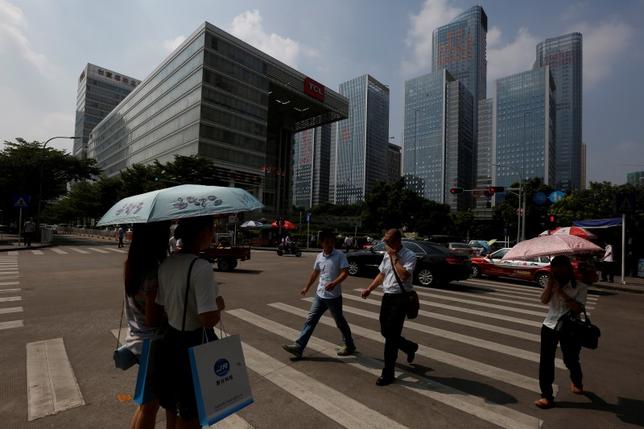 A housing boom in China’s wannabe “Silicon Valley” of Shenzhen risks undermining the city’s tech boom as young professionals consider moving out to avoid the highest residential prices in the country.

In the space of four decades, Shenzhen has transformed itself from a fishing village into a manufacturing center and now a tech hub – attracting top firms and young talent in sectors including technology, advertising and design.

But a property frenzy, which has driven prices up by 580 percent in the past 10 years, is beginning to weigh on the city’s competitiveness, tech firms, professionals, industry groups and officials say, just as it strives to develop new economic drivers and pull away from old-economy manufacturing.

The tech hub has drawn some of China’s top names including internet giant Tencent and telecoms firm Huawei, plus emerging new leaders such as DJI, the world’s biggest commercial drone maker, and gene mapping company BGI.

If these firms and those that are part of the tech-hub’s ecosystem of startups struggle to attract talent because of high housing costs, they could start to doubt if Shenzhen is the right location for their operations.

That could stunt the development of a high-tech sector that Chinese media reports showcase as a shining example of China’s move up the value chain.

“For people of my age group, Shenzhen’s high property prices are causing a lot of pressure,” said Chen Zhitao, a 25-year-old marketing officer for Chinese online retail giant JD.com. To save on rent, he shares a tiny flat with two others where one has to sleep on a couch each night.

“Now my friends are discussing more and more whether to leave, and to consider what other cities we might go to,” he said.

The Shenzhen city government, which has tightened housing regulations to take the heat out of the price rally, and its Science and Technology Innovation Commission did not respond immediately to requests for comment.

While commercial rents are stable, residential prices have soared as available building land within the city shrank.

In the year to April, prices rose almost 63 percent – the biggest rise in China – data shows. Average residential property prices in Shenzhen in May were 40 percent higher than Beijing and 30 percent above Shanghai, according to data provider China Real Estate Index System (CREIS).

Blue-chip firms headquartered in Shenzhen acknowledge the boom is a concern.

“The company has been very proactive with their (housing) policies. It’s very obvious,” said a Tencent employee who only gave his surname Chen.

“They can’t not offer these if they want to retain and attract employees … high property prices are a big concern for them.”

Other major firms such as ZTE Corp, Huawei Technologies, DJI Holdings and the Qianhai Free Trade Zone authority told Reuters they own apartments and dormitories that they rent to staff at below-market rates.

Ren Zhengfei, founder and head of Shenzhen-based Huawei, expressed concern in an interview with China’s state-run Xinhua news agency about the impact of rising property prices on business development on the mainland.

Housing and production costs are too high, he said. Huawei declined to comment further.

Many other high-tech firms can not afford subsidies.

Fiona Zhang, a 26-year-old who helped found an online marketing startup, said she was forced to move out of her studio apartment last year when her rent jumped 42 percent.

She now shares a four-bedroom flat with three others. She said many of her friends had quit Shenzhen to move to a cheaper city.

“Starting my own business has been my dream,” she said.

These cost pressures suggest the Shenzhen government needed to change policy, Chen Geping, the head of the Shenzhen Housing Research Association, was quoted as saying.

“Shenzhen’s current property dilemma … is no longer to protect families in need, but how to find housing for its (professional) talent,” Chen said in the Southern Weekly newspaper.

Other business groups, such as the Federation of Shenzhen Industries, said they were concerned about the impact of property prices on Shenzhen’s competitiveness.

An employee at the Shenzhen Promotion Association for Small & Medium Enterprises, who gave his surname as Huang, had a different take on the impact of the housing rally.