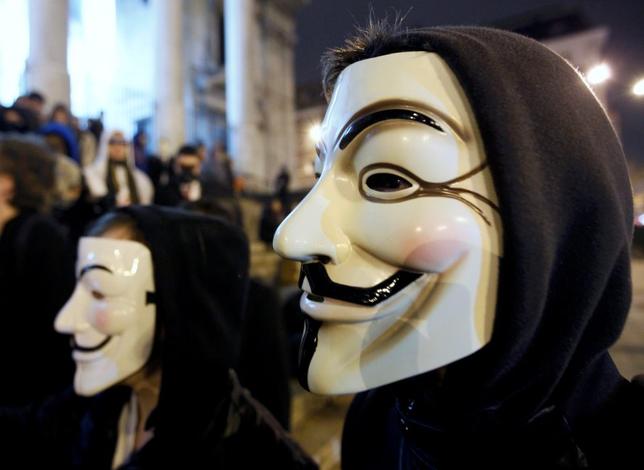 A protester wearing a Guy Fawkes mask, symbolic of the hacktivist group ”Anonymous”, takes part in a protest in central Brussels January 28, 2012.

Greece’s central bank became the target of a cyber attack by activist hacking group Anonymous on Tuesday which disrupted service of its web site, a Bank of Greece official said on Wednesday.

“The attack lasted for a few minutes and was successfully tackled by the bank’s security systems. The only thing that was affected by the denial-of-service attack was our web site,” the official said, declining to be named.

Anonymous originated in 2003, adopting the Guy Fawkes mask as their symbol for online hacking. The mask is a stylized portrayal of an oversized smile, red cheeks and a wide moustache upturned at both ends.

“Olympus will fall. A few days ago we declared the revival of operation Icarus. Today we have continuously taken down the website of the Bank of Greece,” the group says in a video on You Tube.

“This marks the start of a 30-day campaign against central bank sites across the world.”