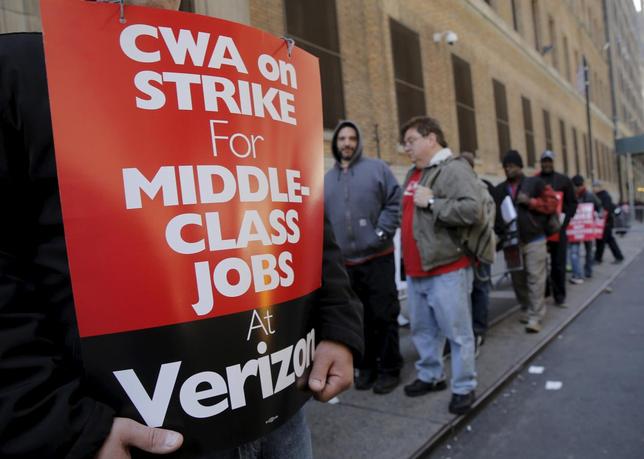 Members of the Communications Workers of America (CWA) picket in front of Verizon Communications Inc. corporate offices during a strike in New York City, April 13, 2016.

Verizon Communications Inc said it had presented a revised contract proposal to the unions representing nearly 40,000 workers, who have been on strike after contract talks hit an impasse.

The company said on Thursday it would now offer a wage increase of 7.5 percent from its previous offer of a 6.5 percent raise over the term of the contract.

“We are putting our last, best final offer on the table,” Verizon’s chief administrative officer Marc Reed, said in a company statement.

“The ball is now in the unions’ court to do what’s right for our employees.”

Workers from network technicians to customer service representatives in Verizon’s Fios Internet, telephone and TV services across several U.S. Northeast and Mid-Atlantic states, including New York and Virginia, walked off the job on April 13 in one of the largest U.S. strikes in recent years.

(Reporting by Malathi Nayak and Narottam Medhora in Bengaluru; Editing by Kirti Pandey)