Microsoft to stop production of Xbox 360

April 20, 2016
0
This post was originally published on this site

Citing a recent and large increase in credit card fraud, Washington, DC-area grocer Giant Food says it will no longer allow customers to use credit cards when purchasing gift cards and reloadable or prepaid debit cards. 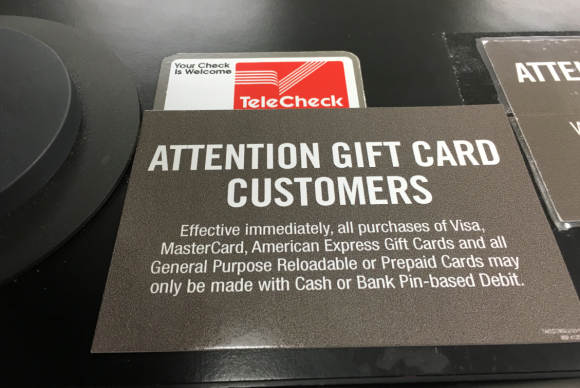 A new warning sign at Giant Food checkout counters. Giant says the warning was prompted by a spike in credit card fraud.

I had no idea this was a new thing at Landover, Md.-based Giant, which operates 169 supermarkets in the Washington, D.C. metro area.  That is, until I encountered a couple of large new “attention” stickers in the checkout line at a local Giant in Virginia recently. Next to the credit card terminal were big decals with the warning:

“Attention Gift Card Customers: Effective immediately, all purchases of Visa, MasterCard, American Express Gift Cards and all General Purpose Reloadable or Prepaid Cards may only be made with Cash or Bank Pin-based Debit.”

Asked for comment about the change, Giant Food released a brief statement about the policy change that went into effect in March 2016, but otherwise didn’t respond to requests for more details.

“Giant has recently made a change in procedures for purchasing gift cards because of a large increase of fraudulent gift card purchasing,” the company said. “Giant will now accept only a Bank PIN-based debit card or cash for all VISA, MasterCard, and American Express gift cards, as well as re-loadable and prepaid gift cards. This change has been made in order to mitigate potential fraud risk.”

One of the easiest ways thieves can cash out? Walk into a grocery or retail store and buy prepaid gift cards using stolen credit cards. Such transactions — if successful — effectively launder money by converting the stolen item (counterfeit/stolen card) into a good that is equivalent to cash or can be easily resold for cash (gift cards).

I witnessed this exact crime firsthand at a Giant in Maryland last year. As I noted in a Dec. 2015 post about gift card fraud, the crooks caught in the process of these cashout schemes usually are found with dozens of counterfeit credit cards on their person or in their vehicle. From that post:

“The man in front of me in line looked and smelled homeless. The only items he was trying to buy were several $200 gift cards that Giant had on sale for various retailers. When the first card he swiped was declined, the man fished two more cards out of his wallet. Each was similarly declined, but the man just shrugged and walked out of the store. I asked the cashier if this sort of thing happened often, and he just shook his head and said, ‘Man, you have no idea.’”

Meanwhile, every Giant I visit still asks me to swipe my chip-based card, effectively negating any added security the chip provides. Chip-based cards are far more expensive and difficult for thieves to counterfeit, and they can help mitigate the threat from most modern card-skimming methods that read the cardholder data in plain text from the card’s magnetic stripe. Those include malicious software at the point-of-sale terminal, as well as physical skimmers placed over card readers at self-checkout lanes — like this one found at a Maryland Safeway earlier this year.

In a recent column – The Great EMV Fake-Out: No Chip for You! – I explored why so few retailers currently allow or require chip transactions, even though many of them already have all the hardware in place to accept chip transactions. I suspect also that grocers are reluctant to introduce chip readers at self-checkout lanes, as more supermarket chains seem to be pushing customers in the self-checkout direction.

This entry was posted on Wednesday, April 20th, 2016 at 2:39 pm and is filed under A Little Sunshine. You can follow any comments to this entry through the RSS 2.0 feed. You can skip to the end and leave a comment. Pinging is currently not allowed.