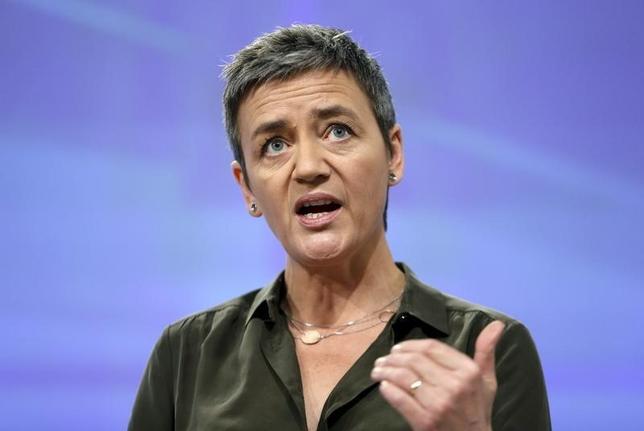 European Competition Commissioner Margrethe Vestager addresses a news conference in Brussels, Belgium, January 11, 2016, after the European Commission demanded on Monday that Belgium recover some 700 million euros ($762.9 million) from 35 large companies in back taxes in its…

BRUSSELS – Two out of three online content providers block consumers in another EU country from buying their products or services and could face investigation, European Union antitrust regulators said on Friday.

The findings by the European Commission came after a year-long enquiry into barriers to cross-border trade in electronics, clothing, shoes and digital content in the 28-country bloc during which it surveyed more than 1,400 companies on their business practices.

The enquiry is part of the Commission’s campaign to spur growth in e-commerce and help the bloc catch up with Asia and the United States.

The EU competition authority said 68 percent of providers of digital content, such as TV shows, films, music and sports, block consumers located in other EU countries, a practice known as geoblocking.

In addition, 38 percent of consumer goods retailers in its survey said that they block consumers located in other EU countries, mainly by refusing to deliver abroad or accept foreign payment methods, and, to a lesser extent, by re-routing or blocking website access.

While the majority of geoblocking results from unilateral business decisions by retailers, 12 percent of retailers reported contractual restrictions on selling cross-border for at least one product category they offer.

“Where a non-dominant company decides unilaterally not to sell abroad, that is not an issue for competition law. But where geoblocking occurs due to agreements, we need to take a close look whether there is anti-competitive behavior, which can be addressed by EU competition tools,” European Competition Commissioner Margrethe Vestager said.

Antitrust experts say it may be difficult for regulators to find evidence of anti-competitive behavior.

“Where digital content is geoblocked this can often be a result of national intellectual property rights. Assessing whether this is a genuine concern or a pretext to separate the internal market is a delicate exercise in each of these cases,” said Bernd Meyring, a partner at law firm Linklaters.

“Given all the limitations of existing tools, legislation would be a far more appropriate tool to deal with the issue than trying to use an imperfect tool box,” he said.

Vestager will publish a preliminary report in mid-2016 covering not just geoblocking but also other potential competition problems hindering e-commerce trade. The final report is due in the first quarter of 2017.