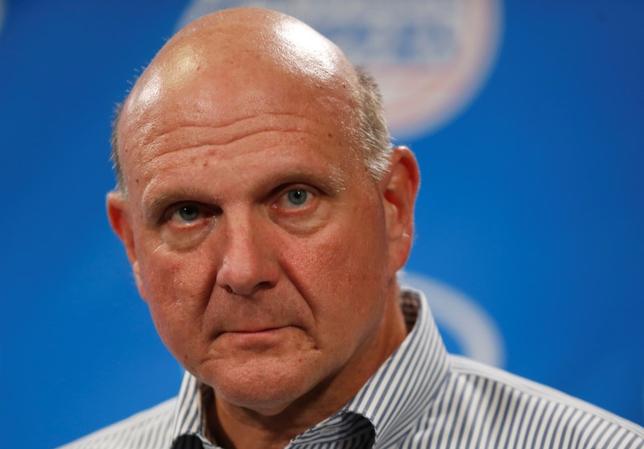 Steve Ballmer speaks at a news conference after being introduced at a fan event at the Staples Center in Los Angeles, California August 18, 2014.

Speaking on Wednesday night at a dinner hosted by Fortune magazine, Ballmer said the position was right for the time, but the threat from Linux was now “in the rearview mirror.”

“The company made a ton of money by fighting that battle very well,” he said. “It’s been incredibly important to the company’s revenue stream” to maintain its position with its own Windows operating system.

These days Microsoft is softening its anti-Linux position, including announcing earlier this week that it would sell a Linux-compatible version of its SQL Server database software.

Ballmer said he “loved” seeing the announcement, which prompted him to email current Chief Executive Satya Nadella in support.

He did stick to a theme he had raised at Microsoft’s shareholder meeting in December: disclosure. Microsoft should divulge software, hardware, and cloud enterprise revenue and profit, he said.

Ballmer took the reins of Microsoft in January 2000, just before technology stocks embarked on a multiyear drop. Microsoft shares lost more than 40 percent of their value in the time between Ballmer’s appointment and the announcement in 2013 that he would resign.

Since Nadella took over in February 2014, shares have risen more than 50 percent.

Overall, Ballmer characterized Nadella’s tenure as good, attributing part of the change in market sentiment simply to having a new executive in charge.

He acknowledged that he and his predecessor, Bill Gates, are no longer close, saying the two “have gone our own paths.”

One possible explanation for his sanguine views: yoga, a hobby Ballmer, famous for frenzied oratory, said he had taken up since leaving Microsoft.

“You get a lot of time to work out, meditate, take it easy,” he said. “It’s a wonderful thing to do.”