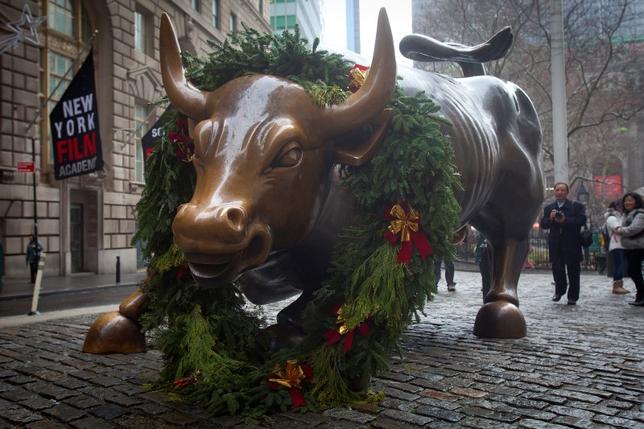 The Wall Street bull statue is pictured in the Manhattan Borough of New York, December 23, 2014.

Symphony, the WhatsApp for the financial world, will significantly increase its user base this year at major institutions including a top asset manager, shareholder Goldman Sachs (GS.N) said on Monday.

Google (GOOGL.O) and 18 of the world’s biggest banks and fund managers have invested around $170 million in Symphony, touted as a rival to the Instant Bloomberg messaging system and Thomson Reuters’ (TRI.TO) Eikon Messenger, which link traders across the main global financial markets.

“On Symphony, we are already deploying it a lot internally, so are other banks,” Goldman Managing Director Bobby Vedral told an industry meeting in London.

“There is one big asset manager who will soon start to make it compulsory for interacting with them. It will certainly be used in a widespread way within the year.”

Asked about Vedral’s comments, Symphony declined to name the asset manager involved. “We are rolling out with a number of clients but we’re not ready to give details on user data or numbers at this time,” a spokesman for the Palo Alto-based company said.

Symphony says it has amassed 75,000 users on the platform,

which emerged after a row between some banks and Bloomberg over the use of client information by its journalists.

The system allows financial firms, corporate customers and individuals to put all their digital communications – chats, texts, tweets and emails – on one centralized platform, aimed at creating a flexible and secure messaging service.

But there are no publicly available details on when its shareholder institutions, who will also form the bulk of its initial paying customer base, will come on line.

Several banking sources told Reuters that internal usage at their institutions was growing. They said the system had successfully overcome internal barriers of regulatory compliance, development and budgets.

The acid test, though, will be how far banks and asset managers will be willing to dump existing alternatives and use Symphony to communicate with each other and with clients.

A spokesman for Goldman said roughly half of the bank’s 38,000-strong workforce was already on the system, but not yet using it to talk to external users.

An official from another of the world’s top 10 banks by market capitalization, also a Symphony shareholder, said: “We are probably slightly behind some of the other banks but this month about 150 employees will be starting to use it. Then it will be expanded to include further numbers.”

The source added: “With us it will definitely be thousands by the end of the year. From what I hear, the other banks are in a similar position.”