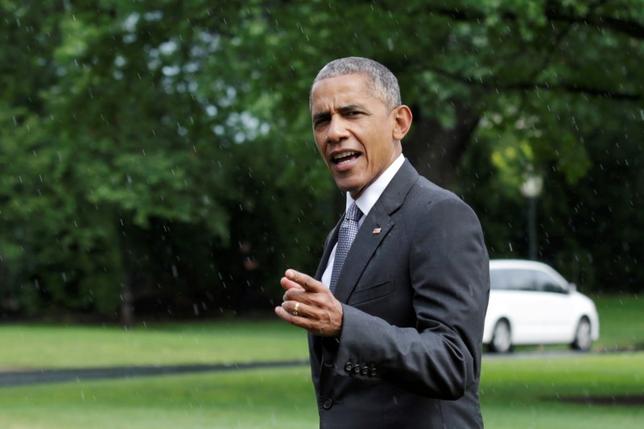 U.S. President Barack Obama points as he walks on the South Lawn of the White House upon his return to Washington, U.S., after visiting wounded service members the Walter Reed National Military Medical Center, June 21, 2016.

President Barack Obama will head to Silicon Valley on Friday to a summit aimed at connecting about 1,200 entrepreneurs from 170 countries with the biggest and brightest players in the U.S. tech sector and venture capital community.

Hot-button political issues that the White House and tech sector normally grapple with, such as the use of social media by extremists, the desire by law enforcement for a way around encryption, and cyber security, will not be on the agenda.

Obama is using the summit – the seventh in a series which have reached a total of 17,000 people mainly in Muslim-majority countries around the world – to help bolster his foreign policy legacy as his time in offices draws closer to the end on Jan. 20, 2017.

The idea for the Global Entrepreneurship Summit series emerged from a speech Obama made in Cairo in 2009, which he used to signal he wanted to overhaul U.S. policy on the Middle East and try to repair the U.S. relationship with the Muslim world.

When he took office, Obama worked to extract U.S. troops from long and costly conflicts in Iraq and Afghanistan. But Syria’s civil war and the rise of Islamic State militants in Syria and Iraq have tested his strategy.

Islamic State has used social media to attract followers. Some have become self-radicalized, including a man who killed 49 people and wounded 53 at a gay nightclub in Orlando earlier this month, and a married couple who killed 14 people in San Bernardino, California last year.

But Obama’s focus on Friday will not be about using technology to counter violent extremism. Rather, it is about connecting entrepreneurs from emerging markets with each other, and with potential sources of capital, giving a lift to emerging markets and contributing to security, said Ben Rhodes, Obama’s deputy national security adviser.

“We believe the United States needs to have affirmative values that we are promoting around the world, in addition to the efforts we do to counter terrorism,” Rhodes told reporters.

“We wanted to discuss not just want we’re against, but what we’re for,” Rhodes said.

Obama is set to make remarks on Friday at the summit, held at Stanford University, and be part of a panel discussion with Facebook Chief Executive Mark Zuckerberg.

Obama will also do an interview with Zuckerberg on Facebook Live, and then talk with four entrepreneurs from around the world via Google, Rhodes said.