Tencent to buy Finnish gaming firm Supercell from SoftBank, others in $8.6 billion deal 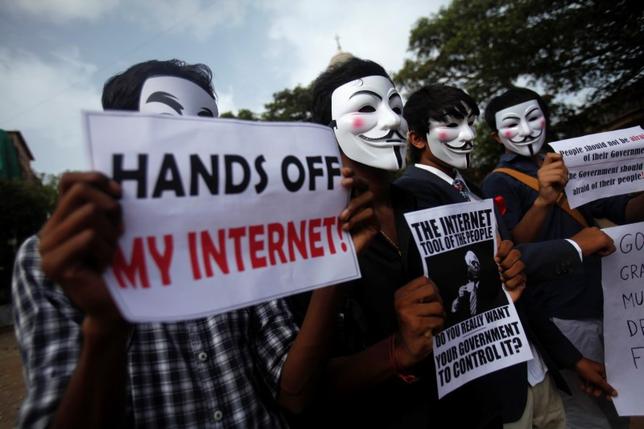 Protesters from the Anonymous India group of hackers wear Guy Fawkes masks as they protest against laws they say gives the government control over censorship of internet usage in Mumbai, June 9, 2012.

At least a dozen countries are considering or have enacted laws restricting online speech, a trend that is alarming policymakers and others who see the internet as a valuable medium for debate and expression.

Such curbs are called out as a threat to the open internet in a report on internet governance set to be released today at an Organization for Economic Cooperation and Development meeting in Cancun, Mexico.

The report, reviewed by Reuters, warns of dangers for the global internet, including intrusive surveillance, rising cybercrime and fragmentation as governments exert control of online content.

It was prepared by the London-based Chatham House think tank and the Centre for International Governance Innovation, founded by former BlackBerry Ltd co-chief Jim Balsillie.

China and Iran long have restricted online speech. Now limitations are under discussion in countries that have had a more open approach to speech, including Brazil, Malaysia, Pakistan, Bolivia, Kenya and Nigeria.

Advocates said some of the proposals would criminalize conversations online that otherwise would be protected under the countries’ constitutions. Some use broad language to outlaw online postings that “disturb the public order” or “convey false statements” – formulations that could enable crackdowns on political speech, critics said.

“Free expression is one of the foundational elements of the internet,” said Michael Chertoff, former U.S. secretary of Homeland Security and a co-author of the internet governance report. “It shouldn’t be protecting the political interests of the ruling party or something of that sort.”

Turkey and Thailand also have cracked down on online speech, and a number of developing world countries have unplugged social media sites altogether during elections and other sensitive moments. In the U.S. as well, some have called for restrictions on Internet communications.

“This is the next evolution of political suppression,” said Richard Forno, assistant director of the University of Maryland, Baltimore County Center for Cybersecurity. “Technology facilitates freedom of expression, and politicians don’t like that.”

Tanzania and Ethiopia have passed laws restricting online speech. In others, including Pakistan, Brazil, Bolivia and Kenya, proposals are under discussion or under legislative consideration, according to a review of laws by Reuters and reports by Internet activist groups.

In Bolivia, President Evo Morales earlier this year said that the country needs to “regulate the social networks.” A bill has been drafted and is ready for introduction in the legislature, said Leonardo Loza, head of one of Bolivia’s coca growers unions, a supporter of the proposal.

“It is aimed at educating and disciplining people, particularly young Bolivians, and fighting delinquency on social networks,” Loza said. “Freedom of expression can’t be lying to the people or insulting citizens and politicians.”

A bill in Pakistan would allow the government to block internet content to protect the “integrity, security or defense” of the state. The legislation, which has passed a vote in Pakistan’s lower house of parliament, is supposed to target terrorism, but critics said the language is broad.

It comes after Pakistan blocked YouTube in 2012 when a video it deemed inflammatory sparked protests across the country and much of the Muslim world.

Earlier this year, YouTube, which is owned by Google, agreed to launch a local version of its site in the country. But now, the internet report said, the Pakistan Telecommunications Authority can ask the company to remove any material it finds offensive.

COMPANIES IN THE CROSSFIRE

U.S. internet companies have faced mounting pressure in recent years to restrict content. Companies’ terms of service lay out what users can and cannot post, and they said they apply a single standard globally. They aim to comply with local laws, but often confront demands to remove even legal content.

The new laws threaten to raise a whole new set of compliance and enforcement issues.

“There’s a technical question, which is, could you comply if you wanted to, and then the bigger meta question is why would you want to cooperate with this politicized drive to suppress freedom of expression,” said Andrew McLaughlin, Google’s former director of global policy and now leading content organization at Medium.