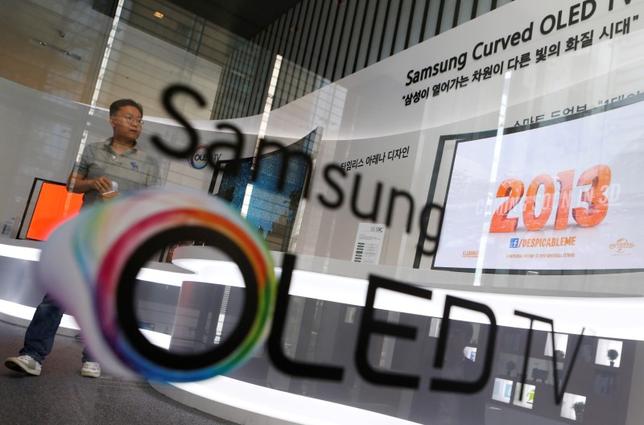 A man looks at Samsung Electronics’ first curved, super-thin OLED television set displayed at the main office of the company in Seoul June 27, 2013.

The shift toward OLED has been prompted mainly by Apple Inc’s expected adoption of next-generation OLED technology in its phones as early as next year.

The success of those firms reflects a broader trend in Japan’s consumer electronics sector. Former giants such as Sharp and Sony Corp have struggled against the scale of their Asian rivals, while lesser-known manufacturers have survived by developing niche technologies.

Tokki, a Canon Inc unit which makes vacuum evaporators used in making OLED panels, has an order book of several years, according to industry executives.

Japanese manufacturers began investing in OLED technology in the 1990s, led by Sony and Pioneer Corp. Most have since given up due to the high costs and defect rates, but smaller equipment makers in the supply chain have kept at it, largely helped by growing sales to Samsung and LG Display.

“Samsung accounts for roughly 70 percent of orders for those suppliers,” said Hisashi Hattori, OLED consultant at Tokyo-based Analysis Atelier Corp. “The current supply chain has been made for Samsung.”

Dai Nippon Printing has become a leader in producing evaporation masks, used to coat light-emitting materials at precise locations on panels. It said last month it will triple its production capacity by 2020.

“That decision was based on our forecast of growth in the OLED market,” said Mitsuru Tsuchiya, general manager of Dai Nippon Printing’s fine optronics division.

With Sharp and Japan Display as well as Chinese display makers such as BOE Technology Group and Tianma Microelectronics expanding investment in OLED production, the market is seen growing 16 percent a year to $44 billion by 2020, according to a Markets and Markets report.

Nikon Corp expects orders from global panel makers to drive up shipments of its lithography equipment – which project circuit patterns on to flat panels – by more than three quarters in the year to March.

Shares of Ulvac, which is more exposed to panel equipment manufacturing than other diversified Japanese peers, jumped 64 percent over the past one year, versus a 22 percent decline in the wider market.

“It’s such a waste that domestic panel makers have not tapped their technologies.”