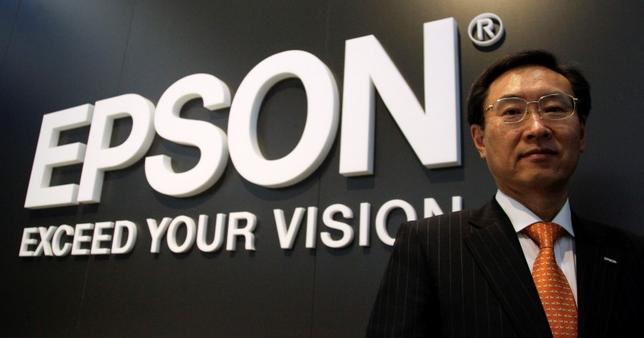 President of Seiko Epson corporation Minoru Usui poses before a Reuters interview during the opening day of the IFA consumer electronics fair in Berlin, August 31, 2012.

Technology developed by Epson (6724.T) that enables robots to perform precise tasks, such as putting a key into a keyhole and turning it with just the right amount of force, is set to open up new markets for the printers, projectors and robotics group, its president told Reuters in an interview.

The Japanese group this week unveiled a new piezo force sensor based on its proprietary inkjet printing technology that has made it a global household name, which it hopes will give it an edge as it seeks to quintuple its robotics sales over the next decade.

The Micro Piezo sensor, which attaches to a robot head, allows the robot to feel its way into a space with an accuracy of 5 microns or 5 thousandths of a millimeter, a roughly tenfold improvement on currently available force sensors, Epson says.

“It changes the way robots can be used,” President and Chief Executive Minoru Usui told Reuters, speaking through a translator. “We think the market potential for the force sensor is enormous.”

Usui said the new sensor could enable Epson to address new markets such as food production, medical equipment and pharmaceuticals, with the automation of tasks such as putting syringes together or packaging medicines.

“To perform complex tasks like this with robots, it has needed really complex software, which has made it impossible for many people,” he said. “This makes the software a lot simpler, which makes it easier to actually introduce the robots.”

The company said by adopting the sensor technology tasks such as placing a capacitor or resistor in an integrated circuit with dozens of tiny holes could be done with less expensive precision tools or software than currently required because the robot can find its own way to locating where the component needs to go.

It could also make for easier automation of tasks like polishing, where a light touch is needed.

The new sensor has a list price of 6,500 euros ($7,200), and is compatible across Epson’s robot range, increasing the total price of an industrial robot by around a quarter to a third.

The potential market is seen largely in countries with low levels of industrial automation like China, India and Brazil, where precision equipment and processes are not already widely in place, said Epson’s German factory automation sales manager Dirk Folkens.

“They are more or less just starting automation,” he said. “German manufacturing is very sophisticated.”

China, the world’s biggest industrial robotics market, still has only 36 robots per 100,000 employees, about half the global average. But it is hungry to automate more, and home appliances maker Midea (000333.SZ) is currently trying to buy German robotics specialist Kuka (KU2G.DE) for 4.5 billion euros.

Epson itself has just begun using force-sensing robots in its own factories to assemble print heads, cartridges for label printers, projectors and watches, said Folkens.

The new sensor is due to go on sale following the Automatica robotics trade fair in Munich at the end of this month.

Epson is estimated to be the world’s eighth-biggest robot maker, with an installed base of 55,000 robots mainly in the electronics industry.

Its robotics sales were 15.4 billion yen ($141 million) in the year to end-March but it aims to increase that figure to 100 billion yen by 2026, with 20 billion expected in the current year.