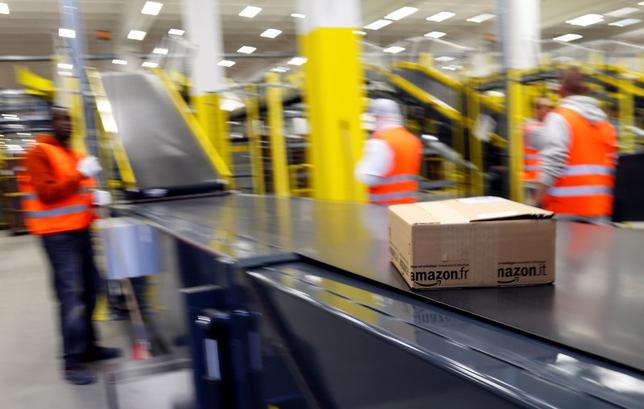 A parcel travels along a conveyer belt at Amazon’s new distribution center in Brieselang, near Berlin November 28, 2013.

Amazon plans to start deliveries of fresh food in Berlin in coming months, a magazine reported on Thursday, as the ecommerce giant extends its foray into groceries beyond its home market.

Amazon plans to work with 15 partners to start delivery of fresh food in the German capital in the fall, unnamed sources told Manager Magazin. Amazon declined to comment.

Germany is already Amazon’s second-biggest market outside the United States, but grocery ecommerce has been slow to take off as the country has a high density of food stores and the dominant discounters Aldi and Lidl have been slow to go online.

However, the country’s second-biggest supermarket chain REWE has been investing heavily in ecommerce in anticipation of Amazon’s move into food.

Management consulting firm A.T. Kearney expects ecommerce will account for 3 percent of Germany’s grocery market by 2020 – up from just 1 percent now. Online already accounts for 5 percent of the grocery market in Britain, which has been a global trailblazer in food ecommerce.

Amazon launched a fresh food offering in Seattle in 2007 and has moved to a handful of other U.S. cities since then, but has been slow to roll it out further due to the logistical challenges of sourcing and handling chilled and frozen goods.

In February, it struck a supply deal with British supermarket Morrisons and this month began testing fresh food deliveries in London, according to media reports.