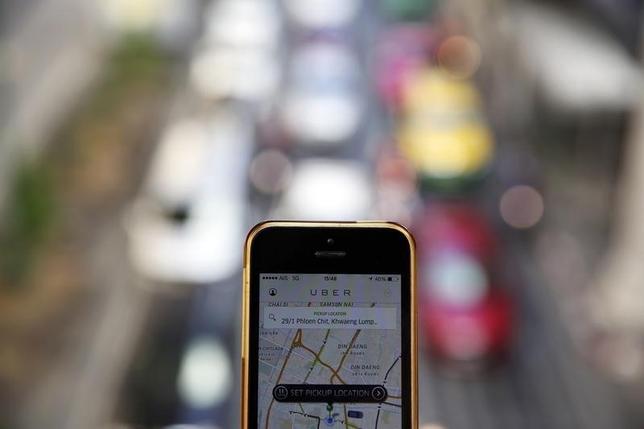 A phone running the Uber application is held above the traffic in central Bangkok December 10, 2014.

The services are popular among city dwellers in Thailand’s grid-locked cities, where bikes weaving through traffic jams get people around in a fraction of the time a car takes.

There are over 186,000 motorcycles registered to provide taxi services in Thailand, almost half in Bangkok, according to government data.

UberMoto and Grab Bike services had caused conflict with those registered to provide taxi services, said Nunthapong Cherdchoo, a senior official at the transport ministry.

Grab Bike said in a statement it was working with the government to resolve the issues.

“Grab Bike offers a service that reduces traffic in Bangkok, one of the world’s most congested cities,” Singapore-headquartered Grab said in a statement. “Staff are well-trained and insured.”

Uber representatives were not immediately available for comment. Uber launched its services in Bangkok in February.

Authorities have arrested 66 motorcycle drivers working for Uber and Grab Bike, Nunthapong said. They would face fines of up to 4,000 baht ($112) for first-time offences and have their licenses suspended for repeat offences.

San Francisco-based Uber has grown rapidly around the world but has faced protests, bans and restrictions in a number of cities.