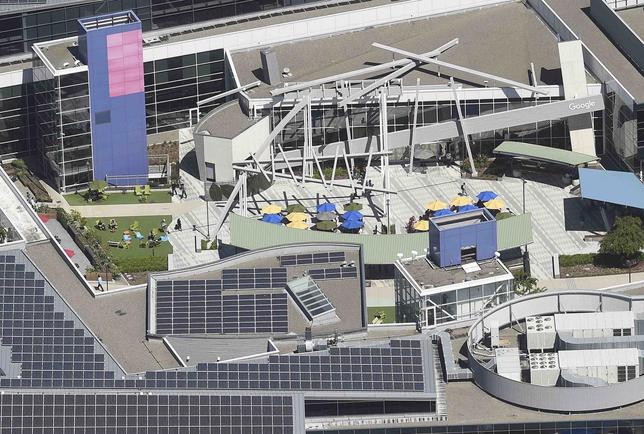 The Alphabet Inc. campus, also known as Googleplex, is shown in this aerial photo in Mountain View, California, United States on April 6, 2016.

Venture capitalists are raising money at the fastest rate in a decade, raking in about $13 billion in the first quarter of 2016.

But much of that cash won’t flow into new startups anytime soon. Rather, venture firms are bracing for a downturn and boosting reserves to keep companies they have already backed from going bust, said venture capitalists and limited partners.

“They are squirrels trying to pack their cheeks full of nuts,” said Ben Narasin, a partner at Canvas Ventures. “Everyone has been waiting for winter to start for a long time.”

The paradox of rising venture fundraising and falling venture investing is the latest sign of a tectonic shift in the tech startup realm. The extraordinary growth of so-called “unicorn” companies such as Uber and Airbnb – now valued at tens of billions of dollars, based on venture investments – has left many high-value startups with no “exit strategy,” in Silicon Valley parlance.

Burned by previous busts, Wall Street has lost its appetite for initial public offerings from money-losing companies. No venture-backed tech startup has gone public this year, and the few that did last year – including enterprise storage company Pure Storage, and cloud storage and file-sharing firm Box – have seen their share prices steadily sink. High valuations have also scared off potential acquirers.

Scale Venture Partners exemplifies the cautious approach taking hold in the VC industry. It chose to do one fewer investment from its last fundraising round and to increase its reserves by more than 10 percent.

“We will have to support our companies longer,” said Rory O’Driscoll, a partner at the firm, which raised a $335 million fund in January.

Accel Partners has reduced its pace of new investments since the middle of last year, while increasing its follow-on funding for portfolio companies, according to an analysis by venture capital database CB Insights.

The venture firm raised $2 billion in March, but it won’t tap into the new fund until late fall, said managing director Richard Wong.

Total U.S. venture investment fell to $12.1 billion in the first quarter – down 30 percent from the most recent peak of $17.3 billion in the second quarter of last year.

Chris Douvos, managing director of Venture Investment Associates, an investor in early-stage venture funds, says the funds he backs are increasing their reserves by 10 percent to 25 percent over what they had in previous funds.

The $13 billion raised by VCs is the third-largest quarter for fundraising since the dot-com peak in 2000, according to Thomson Reuters data. There is now $382 billion of dry powder – cash available to spend – held by both venture capital and private equity firms that invest in technology companies, according to investment banking and consulting firm Bulger Partners.

Many VCs believe that more reserves will be needed for the big cash infusions that startups often need after establishing themselves but before turning a profit.

VCs are also seeing mutual funds retreat from late-stage startup financing deals. Mutual funds led just eight deals in the fourth quarter of last year, down from 26 in the second quarter, according to the research firm CB Insights.

The confluence of trends means that money-losing startups likely will struggle more for venture capital. That, in turn, could lead to more companies failing or cutting staff, cooling the red-hot market for tech talent. It could also strengthen the hand of dominant tech companies, who may face fewer disruptive rivals and attract employees tired of volatile startup life, according to tech recruiters.

Until recently, many venture capitalists have had a land-grab mentality, even with more obscure startups such as Magic Leap – an augmented reality company that raised about $800 million in February – or Social Finance, a startup in the highly scrutinized fintech sector that raised $1 billion in September.

Investors competed fiercely to finance hot companies they believed could be the next Google or Facebook. Higher prices for smaller stakes drove up valuations in companies, including many who burned cash quickly in a quest for growth. Many venture capitalists say they overpaid by 20 to 30 percent, and now have to keep those companies afloat.

Over the past six months, however, nervous whispers about a tech bubble have sparked rising skepticism of venture-dependent startups with stratospheric price tags.

The same venture capitalists who jousted in bidding wars for the next great deal just six months ago are now fending off appeals.

Canvas Ventures, Norwest Venture Partners and Accel Partners – among Silicon Valley’s more prominent firms – say they are getting more calls from peers asking them to join a late-stage round for companies running out of cash.

“We get a lot more ‘special opportunities, just for you,'” said Wong, of Accel Partners. “We get the phone calls, along with everyone else.”

For now, venture capitalists have little problem raising money, despite their new hesitance to spend it and the inability of many startups to turn profits or go public.

That’s in part because many VC firms are currently showing huge paper gains in the value of their portfolios. Many firms are raising as much as possible now, in case valuations drop in so-called “down rounds,” when later stage investors pay less for company stakes than earlier ones, and the returns on their investments plummet, according to limited partners.

Signs of falling returns are already emerging. Cambridge Associates, an investment advisor, measured a -0.4 percent return on the U.S. Venture Capital Index for the third quarter of last year, the first down quarter since 2011.

First Round Capital, an early-stage venture firm, warned its limited partners in a letter a year ago that the seed-stage venture capital deals will see much lower returns in the next several years.

But that warning didn’t scare Douvos, an investor in First Round, which was an early backer of Uber and made a bundle on the IPOs of Square and OnDeck Capital.

“Fund performance will soften,” Douvos said. But, he said, “The returns from First Round are so good that nothing else really matters.”