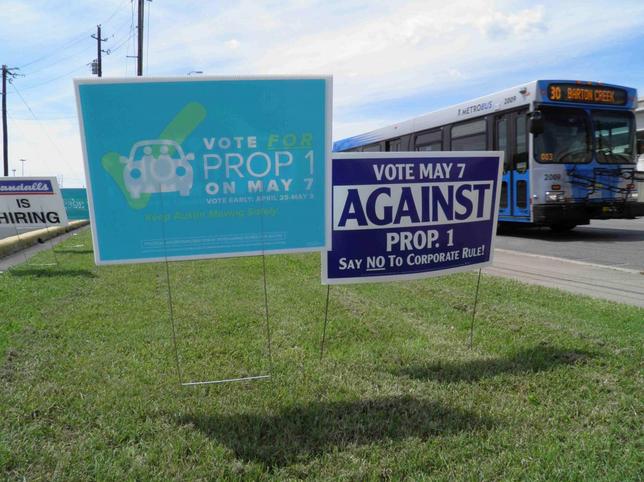 On-demand ride companies have spent millions of dollars ahead of a Saturday vote to overturn a measure mandating fingerprinting for their drivers in Austin, Texas, a sign they are willing to play hardball politics with cities pursuing such requirements.

Campaign finance records show that Ridesharing Works for Austin, a lobby group financed almost exclusively by Uber Technologies Inc [UBER.UL] and Lyft, had collected more than $8 million in contributions and spent $5.4 million in opposition of the fingerprint ordinance as of the end of April.

In contrast, the group backing fingerprinting had spent about $83,000 of its $100,000 in campaign contributions, the records show.

The costly municipal election comes as other cities consider imposing fingerprint-based background checks on drivers, and marks the first time a major U.S. city is putting the regulations to a vote, which happened after a petition drive by Ridesharing Works.

Residents are being asked to decide whether a transportation ordinance passed by the city council in December should be repealed and replaced with one backed by the on-demand ride companies.

The city ordinance calls for all ride-hailing service drivers to have fingerprint-based criminal background checks, while the ride-hailing companies are backing one that does not.

The stakes are high for the privately held Uber and Lyft, which say their background checks are already rigorous and ensure safety. A loss in Austin could prod other cities to require fingerprint criminal background checks, encouraged that they can survive a bruising electoral battle with the ride-hailing services.

“With such prohibitive levels of spending (by the companies) on this campaign, they are sort of saying, ‘Come at us if you want to, but it is going to cost you a lot of money,'” said technology analyst Jan Dawson at Jackdaw Research. “It can be seen as a preemptive strike.”

San Francisco-based Uber has been criticized over allegations of rapes and other assaults by its drivers around the world. In February, an Uber driver was accused of killing six people in a shooting spree in Kalamazoo, Michigan.

The Texas campaign funding from Uber and Lyft has made the special election for what is known as Proposition 1 the costliest in Austin’s history and totals more than the amount raised by all candidates in the city’s 2014 races for mayor and city council.

Ridesharing Works, the company-backed group, has saturated local television with advertisements and hired an army of young workers to blanket the city of about 900,000 people with pamphlets.

“The resources dedicated to educating voters between now and May 7 will reflect how committed our coalition is to protecting the livelihood of thousands of drivers in our community and access to a safe, reliable means of transportation in Austin,” said Travis Considine, a spokesman for the group.

Uber and Lyft did not respond to requests for comment.

The group supporting mandated fingerprinting – Our City, Our Safety, Our Choice – claims the ads are deceptive and that the campaign is motivated by a quest for corporate profit.

“The city just wants to protect public safety with basic rules that no one else has a problem following,” the group said on its website.

Other places battling over fingerprints include Atlanta and Texas’ most populous city, Houston, which along with New York is one of the two major U.S. cities where Uber operates even though its drivers are required to undergo the fingerprint background checks.

The Atlanta City Council postponed a vote planned for early May to further consider a measure to require fingerprinting for ride-hailing service drivers at the city’s main airport.

In April, Uber threatened to leave Houston unless the city dropped the regulation. The city has not backed down, and a study it conducted found background checks by Uber and Lyft often missed felonies, including homicide and sexual assaults.