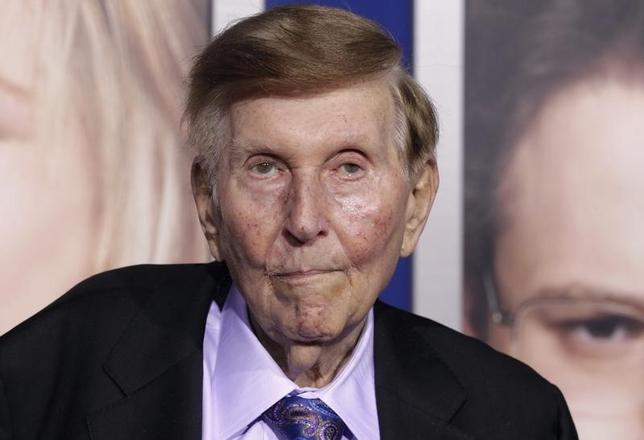 Sumner Redstone’s much-discussed mental status will be dissected in public during a trial set to start on Friday, as an ex-girlfriend tries to convince a Los Angeles judge that the 92-year-old media mogul is incompetent in the culmination of a salacious, months-long legal drama.

If the former girlfriend, Manuela Herzer, succeeds, the outcome could set off a chain of events taking majority control of Viacom Inc and CBS Corp out of Redstone’s hands, which could alter the course of the two media giants.

The law requires the court to presume Redstone is competent, putting the burden of proof on Herzer, 51, to show the multi-billionaire lacked mental capacity in October when he removed her as his designated health care agent. The trail is scheduled to run through May 16.

In court papers, Herzer portrays Redstone as a “living ghost” who communicates in grunts and is obsessed with having sex and with eating steak, even though he is on a feeding tube and no longer able to chew or swallow.

Redstone’s attorneys say he has a severe speech impairment but knew exactly what he was doing in October.

In a surprise order on Monday, Los Angeles Superior Court Judge David Cowan – who will preside over the trial – allowed Herzer’s team to interview Redstone at his home for 15 minutes.

A video of that deposition will be played for the judge on Friday, and a written transcript will be made public. “He could be your best witness,” Cowan said to Redstone’s attorneys.

The mogul controls about 80 percent of the voting shares of Viacom and CBS through his National Amusements movie theater company. If Herzer wins at the trial, a seven-person trust might then assess Redstone’s mental capacity to vote his shares, and possibly take them over, according to a person familiar with the situation.

The starkly different pictures of Redstone’s health are just one strand of a knot that Cowan must untangle to decide who has Redstone’s best interests at heart.

Last year, local authorities tasked with protecting the elderly visited Redstone’s mansion in Beverly Park, a neighborhood of Los Angeles, sources familiar with the case said. The episode is likely to be raised in the trial.

The visit from an Adult Protective Services unit, previously unreported, occurred in February 2015, eight months before Herzer was ejected from Redstone’s mansion. She played a large role in directing Redstone’s care as his health deteriorated through 2014.

A complaint from one of Redstone’s home nurses sparked the visit, one of the sources said. The complaint is not a public record, and Los Angeles County’s Adult Protective Services unit did not immediately respond to questions about the visit. A social worker interviewed Redstone at his Beverly Park home, and no subsequent actions were taken, two sources said.

The two sides are likely to interpret the visit very differently. Redstone’s lawyers could argue the incident bolsters their case that care for their client was inadequate under Herzer’s supervision. Herzer’s team could focus on the fact that the state visited, but took no action, suggesting that Redstone was adequately cared for.

Whether the government visit becomes an issue at trial could depend on how relevant Cowan believes it is to decide Redstone’s capacity last October.

“The court intends for this trial to certainly be dignified and to focus on the legal issues that need to be decided,” Cowan said last month.

Redstone’s lawyers argue that Herzer is merely seeking financial gain. The billionaire also in October revoked a part of his estate plan that would have given Herzer a $70 million inheritance.

Other key witnesses will be two doctors with opposing views of Redstone’s mental capacity last October.

The trust that could take control of the company shares includes Redstone’s daughter Shari and Viacom CEO Philippe Dauman, who clashed over Dauman’s elevation to executive chairman in February. They also could take the stand.