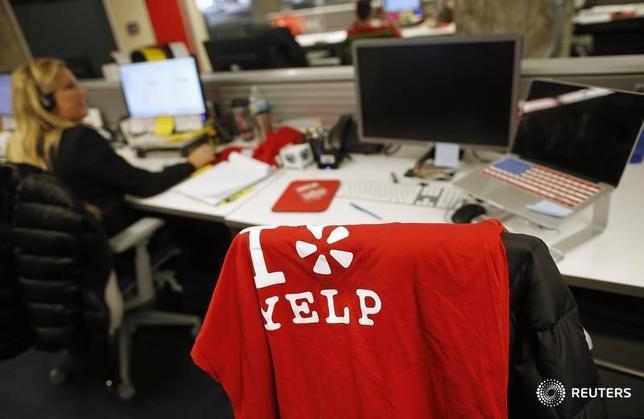 An employee works in the Yelp Inc. offices in Chicago, Illinois, March 5, 2015.

Einhorn, the head of Greenlight Capital, said his firm made new investments in Yelp, according to the fund’s first-quarter letter to investors, which was seen by Reuters.

Einhorn said Yelp “suffered due to missed expectations” and said that it could double its revenue by 2019.

The move up in Yelp shares also brightened social media sentiment around the stock, according to the Thomson Reuters Eikon Social Media Monitor, which analyzes Twitter traffic on stock symbols to derive a positive or negative sentiment score.

At late morning, sentiment was roughly 26 percent net positive, according to the monitor, reversing pervasive negative traffic in the immediate aftermath of the news of Einhorn’s stake late Monday.

“I like the Greenlight thesis on $YELP,” tweeted Tsachy Mishal (@CapitalObserver), portfolio manager at TAM Capital Management. “Hard for me to own companies not making money though.”

But other social media users remained skeptical of the move.

“Einhorn sees ‘potential of a bidding war for $YELP if it decides to sell,'” tweeted Yahoo Finance writer Daniel Roberts(@readDanwrite) Tuesday. “Oh, but it won’t. It should, but won’t.”

The Einhorn news also pumped up options market action in the stock, with investors appearing to exhibit a preference for bearish trades, according to Trade Alert data. Activity in options that would benefit owners should the stock fall was particularly heavy.

Einhorn is widely followed in the secretive hedge fund industry and his letters are often seen to give hints of successful new investment trends. But he has also drawn scorn for some high-profile flops, most recently his big stake in solar energy company SunEdison Inc., which filed for bankruptcy last month.

Greenlight’s portfolio has gained 3.1 percent in the first four months of 2016, beating many hedge fund rivals and the broader stock market. It marks a turnaround from last year’s 20 percent loss, Einhorn’s first down year since 2008.