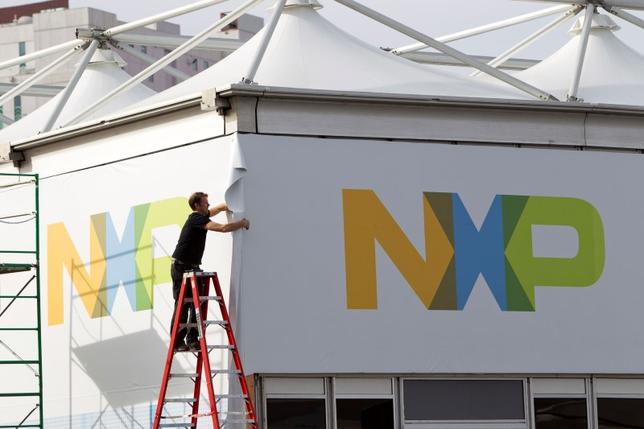 A man works on a tent for NXP Semiconductors in preparation for the 2015 International Consumer Electronics Show (CES) at Las Vegas Convention Center in Las Vegas, Nevada January 4, 2015.

Chipmaker NXP Semiconductors, the world’s top manufacturer of electronics in cars and a producer of chips used in Apple iPhones, gave an upbeat outlook for its growth prospects on Thursday.

The company, which completed its nearly $12 billion acquisition of Freescale last year, told investors it expects to outperform its peers until 2019 by growing at a compound annual rate of between 5 and 7 percent.

NXP also said it expected to reach adjusted earnings before interest, tax, depreciation and amortization (EBITDA) of more than $4 billion by 2019 as a result of combining businesses.

It is the first time NXP had given a detailed outlook for the combined businesses.

The world’s top maker of automotive electronics had earlier said it expected Freescale to be accretive to earnings this year with cost savings of $200 million, resulting in annual cost savings of $500 million in the mid-term.

NXP’s near field communication (NFC) chips enable among other things contactless payments for smartphones, including those of China’s Xiaomi [XTC.UL] and Apple.

Apple on Tuesday reported its first decline in iPhone sales and its first revenue drop in 13 years.

NXP’s products are also used by suppliers to the automotive industry such as Germany’s Continental, which is NXP’s largest customer, bringing in some 10 percent of total revenues.

The firm’s operating margin (EBIT) is expected to reach between 30 and 33 percent by 2019, while NXP expects to invest about 5 percent of its revenues annually.

NXP grew out of Dutch consumer electronics giant Philips, the co-developer of CDs and DVDs, and also has historic roots in Silicon Valley. Freescale was spun out of cellphone and walkie-talkie pioneer Motorola.

NXP shares were up 1.2 percent at $90.03 in early trade in New York, outperforming the semiconductor index which was down 1 percent.