AT&T exec says Internet of Things is a top priority 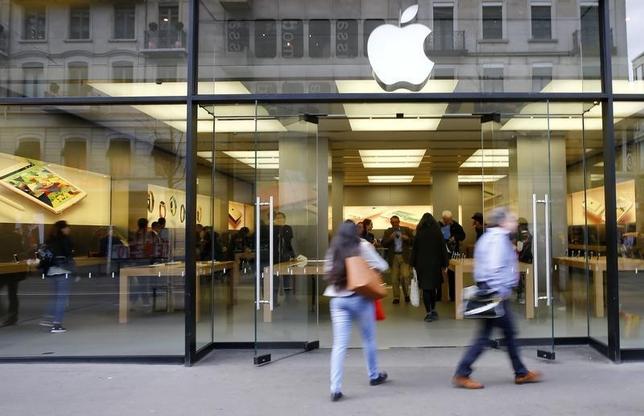 People walk in front of a branch of U.S. technology company Apple in Zurich, Switzerland April 5, 2016.

If Apple (AAPL.O) could cash in the value it lost in the first minute of trading on Wednesday, it would be nearly enough to buy General Motors, Target or Caterpillar.

In fact, the $48 billion-or-so the iPhone maker’s stock shed at its session low could buy any one of nearly 400 components of the S&P 500. Various measures of valuation suggest the stock is probably still cheap – and has been for some time – but that may not motivate buyers concerned shares may fall further on saturation in iPhone sales.

“I would not be surprised in the near term for the stock to fall to the high $80s or low $90s, there’s no catalyst right now,” said Channing Smith, managing director at Capital Advisors in Tulsa, Oklahoma. The firm manages about $1.4 billion in assets and Apple accounts for roughly 4 percent of their holdings, he said.

Apple is still the largest publicly traded company by market capitalization in the world, valued at more than $500 billion after peaking near $775 billion in February 2015. But the iPhone maker’s stock lost as much as 8.1 percent the day after it posted its first quarterly revenue decline in 13 years and set targets below analyst expectations for the next quarter.

At its session low of $95.68, Apple was almost 40 percent below its intrinsic valuation of $153 per share according to StarMine, which projects prices based on earnings per share growth five years forward. That number will likely fall following Tuesday’s earnings miss and reduced expectations.

Even compared to the median target price of 46 analysts, currently $121, the stock trades at a discount of almost 20 percent.

Apple’s 12-month forward price to earnings ratio stands at 11.1 compared with an average of 17.5 over the past 10 years -roughly the life span of the iPhone – according to Thomson Reuters Datastream.

The stock’s price momentum as measured by the Thomson Reuters Eikon model, which weighs long-, medium- and short-term price movements, is the lowest since October 2013.

“The stock is likely going to struggle in the coming months but Apple is not going away,” said Capital Advisors’ Smith. “It is a good risk-reward stock in an otherwise expensive market.”

Investors are paying 17 times for S&P 500 forward earnings, making the 11.1 times they pay for Apple the widest gap in more than 15 years, according to Datastream.

From a technical perspective, the stock could see a short term rebound, as a measure of its internal relative strength indicates shares are oversold.

Gene Munster, a senior research analyst at Piper Jaffray, said he doubts Apple stock will fall further, predicting the anticipated launch of the iPhone 7 will return the company to growth in the fall.

“Things are going to be more optimistic in the future, and the irony of this whole collapse is that it creates an easier comparable for the future,” he said.

“It basically is resetting the bar to make the story, at least for investors, more attractive.”