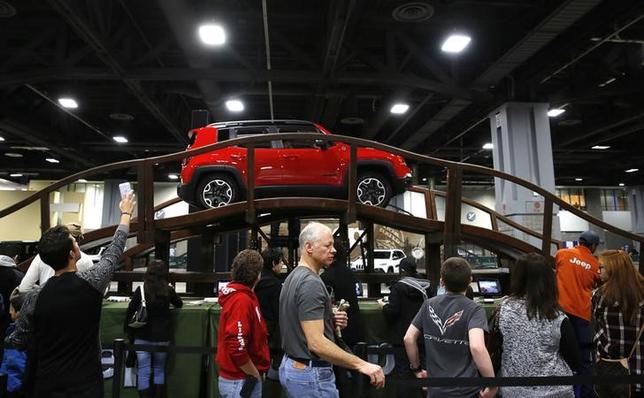 People line up to ride various Jeep vehicles on an off road course at the Washington Auto Show in Washington January 29, 2016. The 2016 Jeep Renegade Trailhawk is at top.

Fiat Chrysler aims to double Jeep’s global sales by 2018, hoping to cash in on a strong demand for sport utility vehicles in emerging markets.

Jeep’s global sales totaled 1.24 million vehicles in 2015, up 22 percent from the previous year.

The Guangzhou plant, which has the capacity to produce 160,000 vehicles a year, is a joint venture between Fiat Chrysler and China’s Guangzhou Automobile Group Co Ltd.

Fiat Chrysler also said in July it would invest $280 million to produce its Jeep automobiles in India from 2017 through an expanded joint venture with Tata Motors.

Fiat Chrysler’s U.S.-listed shares were up 1.4 percent at $7.62 in morning trading on Monday.

(Reporting by Ankit Ajmera in Bengaluru; Editing by Anil D’Silva)