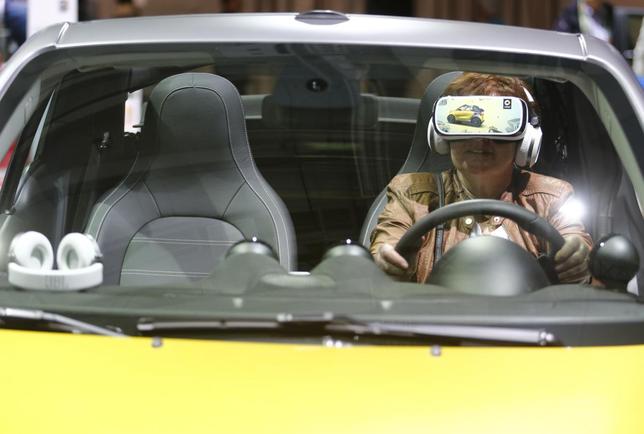 A woman uses virtual reality goggles while sitting in a ‘smart fortwo cabrio’ car prior to the Daimler annual shareholder meeting in Berlin, Germany, April 6, 2016.

German labor rules may force Daimler, the 130-year-old inventor of the motor car, to create more software and technology jobs abroad as it strives to develop a new generation of driverless vehicles, a senior official told Reuters.

Software has emerged as a major battleground among carmakers seeking to develop hi-tech features ranging from smartphone applications and automated parking to lines of code that help onboard sensors read traffic signs.

Daimler’s Mercedes-Benz Cars division wants to compete with rivals emerging from the technology and software sectors, but says German labor rules developed more than 100 years ago are hampering its ability to adapt to the working habits of these industries.

And the problem may get worse, said Daimler board member Wilfried Porth, who is responsible for information technology and human resources.

A new legal proposal giving labor representatives a right to be informed about the extent to which outside contractors are deployed makes life too bureaucratic, Daimler said.

“We are reaching a situation where the mix between trade union and legal rules make flexible working more difficult.”

Under German labor rules, Daimler is forced to limit the number of daily working hours to 10 and provide an 11 hour break before an employee starts the next shift. They also make the use of third-party software contractors cumbersome, Porth said

“In Silicon Valley, companies can make use of cloud computing to gain access to outside know-how,” he said.

“The consequence is that we do not set up many of these activities in Germany, but in India or the United States. This is the only possibility to take advantage of these opportunities.”

Daimler has around 3,000 research and development and information technology staff working in Bangalore, India, and around 200 staff in Sunnyvale, California.

Bangalore is now its main digital engineering hub, where staff work on projects including digital design, crash test simulation and other calculations.

For such jobs to come to Germany as the company looks to expand its software and technology capabilities, union and legal rules need to become more flexible, Porth said.

“We do not want to cut back worker protection, but we need to leave people the freedom to decide what hours they work,” he said, adding office jobs – as opposed to those on the production line – require more flexible and mobile working conditions.

“Extremely strenuous physical labor, which requires rigid rules – we don’t have that to the same extent as we used to.”