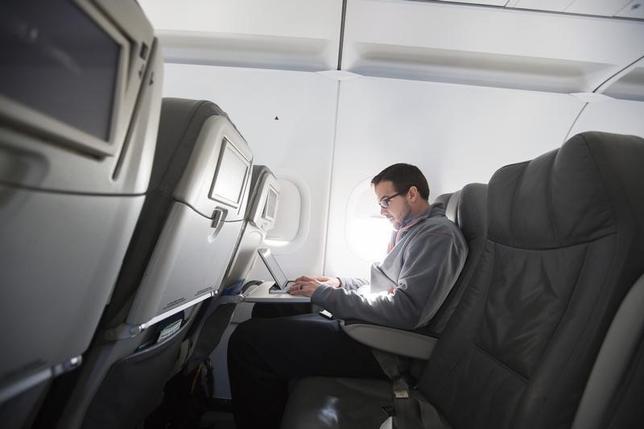 A man uses his laptop while on a special JetBlue media flight out of John F. Kennedy International Airport in New York December 11, 2013.

In-flight Wi-Fi may sound like a great way to keep in touch with friends and family or catch up on work, but services are often so slow, you’re better off sticking to the in-flight magazine.

Wi-Fi on U.S. domestic routes is already widespread although air-to-ground (ATG) technology can mean service is slow. In Europe, a patchwork of regulatory regimes has hindered the creation of any substantial ATG networks, while satellite-based systems have until now been too expensive for short-haul routes.

Inmarsat, long a provider of satellite communications to the maritime industry, has spent five years building its Global Express network for aviation. Final ground and flight testing is underway, with three satellites already in service.

“Existing solutions have not met market expectations … Despite all of the happy talk, the state of play is an inconsistent patchwork,” Leo Mondale, president of Inmarsat Aviation, said at the Aircraft Interiors Expo in Hamburg.

U.S.-based rival Viasat is launching two new high-powered satellites that it says will significantly improve broadband speeds from next year.

According to a 2016 global report by Routehappy, which rates flight amenities, travelers currently have a chance of getting Wi-Fi on more than one-third of available seats worldwide, with around 60 airlines offering the service.

But just 6 percent of the flights with Wi-Fi have connectivity that is comparable to a home broadband service and which allows for data-rich usage such as video streaming.

It’s not just passengers who like Wi-Fi on board. It can also be used in the cockpit to identify weather patterns, optimize routes, and for quick identification and reporting of maintenance issues, Carl Esposito, vice president of marketing and product management at Honeywell Aerospace, told Reuters.

Honeywell teams with Inmarsat to provide the hardware for airlines to connect to the Global Express network.

In the cabin, having Wi-Fi connected systems also makes for easier upgrades of in-flight entertainment and can bring in more revenues from entertainment, services and advertising.

Shares in Gogo, which provides in-flight Wi-Fi in North America using ATG technology, fell in February after American Airlines threatened to end its contract via a lawsuit, saying that the Viasat service was superior.

Gogo is working on its own satellite-based service, known as 2Ku, and in February signed a deal with satellite operator SES to provide extra capacity.

Gogo has put forward a 2Ku proposal for 200 aircraft for AA, although no decisions have been made yet, Gogo president Michael Small said in an statement to Reuters.

Bruner said the aviation connectivity market had become hyper-competitive in terms of pricing and that there were too many players fighting over too few planes.

Inmarsat, which has signed up Lufthansa and Singapore Airlines to its network, highlighted price pressure in the industry when it reported results last month.

“There probably needs to be some consolidation,” Bruner said, adding there was space for three or four providers and that each would need to serve about 1,500 aircraft to break even on satellite-based services.

Panasonic has signed up 3,000 aircraft, with 1,100 in service, he said. Gogo’s 2Ku has commitments for over 850 aircraft and expects to have 75 installed this year, while Inmarsat has over 300 for Global Express and says more are to come.

Bruner said the AA and Gogo row showed that older systems in place in North America were ripe for replacement and that there would be a real fight for contracts.

“I think it will be a really crazy next 24 months. We’ll win some and we’ll lose some, but it will be interesting,” he said.