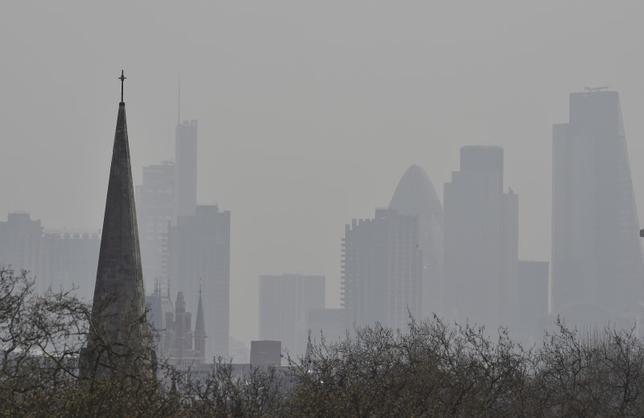 The City of London financial district is seen from Primrose Hill, April 10, 2015.

Britain leaving the European Union could give fledgling financial technology companies an immediate shot in the arm but deprive them of expansion later on, industry officials said on Monday.

The idea is that Brexit, as a vote to leave is known, could be a problem for traditional banking, providing some opportunity for the new firms.

Britain has sought to lead the way in fostering financial technology – such as platforms that allow individuals to lend small sums to businesses or smartphone apps for payments – to “disrupt” the dominant, big banks on the high street.

The sector – known as fintech – employs over 60,000 people with revenues of 6.6 billion pounds ($9.40 billion) in 2015, still tiny compared with the overall financial services sector.

That means, “Brexit might discombobulate the incumbents for a number of years, allowing fintech to move into that space,” he said.

Imran Gulamhuseinwala, a partner at consultants EY, agreed. “Anything that puts innovation further down the list (for traditional firms) creates more breathing room for fintech.”

But he added that a market larger than Britain would be needed longer term for the fledgling companies to “scale up”.

Emily Reid, a lawyer at Hogan Lovells, said Brexit would deprive fintech of potential access to a large market at a time when the UK regulatory regime was still challenging.

“It won’t take any of the regulatory burden away. I can’t see any upside,” Reid said.

UK financial services minister Harriett Baldwin told the 1,400 delegates crammed into the financial district’s ancient Guildhall that the government would step up efforts to foster fintech.

A new information hub would make it easier for start-ups to find legal and accounting services, and a government agency will build “fintech bridges” for them to expand internationally, Baldwin said.