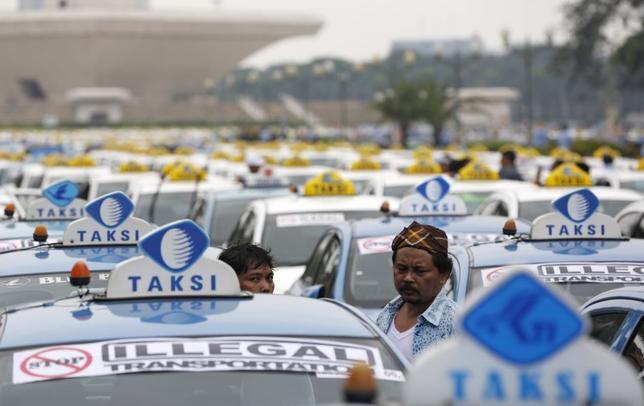 Taxis are seen parked near the National Monument as their drivers take part in a protest against what they say is unfair competition from ride-hailing services, in Jakarta, Indonesia March 14, 2016.

Ride-hailing apps Grab and Uber must partner with a transport business and register their cars by the end of May if they want to continue to operate in Southeast Asia’s largest economy, a minister said on Thursday.

“Uber, Grab are app companies. If they want (to operate), they have to partner with a transportation business entity, like a car rental company,” Transportation Minister Ignasius Jonan told reporters.

The proliferation of cheap taxis using ride-hailing apps Grab and Uber in gridlocked Jakarta has made the traditional pick-up and drop-off taxi services unprofitable, threatening the business models of the country’s top taxi firms.

Indonesian cabbies clashed with drivers working for online apps on Tuesday, pulling them off their bikes and assaulting them as thousands of drivers took to the streets of Jakarta calling for a ban on ride-hailing apps like Grab and Uber.