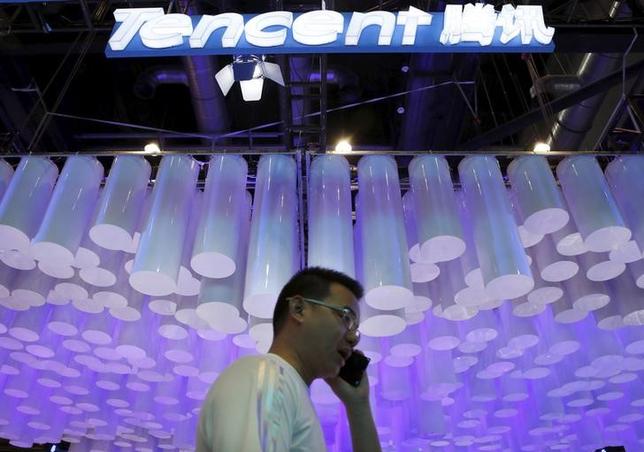 A man uses a mobile phone in front of a logo of Tencent at the Global Mobile Internet Conference (GMIC) 2015 in Beijing, China, April 28, 2015.

Tencent Holdings Ltd (0700.HK) is not only China’s largest social network and online entertainment firm, it is now big in mobile payments too.

It has quietly built one of the world’s largest payments systems, with transactions which could total more than $500 billion this year, according to Reuters calculations.

While most of Tencent’s money still comes from online gaming, it has also developed a hit mobile messaging app called WeChat which had 697 million monthly active users at the end of December, up from 650 million at the end of September.

And it is building new businesses on WeChat, including gaming, social advertising akin to Facebook Inc’s (FB.O), and mobile banking. Tencent does not disclose whether it is making money from its mobile payments business.

However Tencent’s fourth quarterly earnings report on Thursday, which showed overall revenue grew at its quickest rate in three years and beat analysts’ estimates, also revealed how much it paid banks in fees for customers sending each other money via WeChat.

These fees, which Tencent Chief Executive Pony Ma said amount to 0.1 percent of each transaction, were more than 300 million yuan in January. That would mean such transactions on WeChat Payment totaled over 300 billion yuan ($46 billion) that month, according to Reuters calculations.

And this figure does not include transactions for popular services such as paying for taxis, restaurants and online media like video games and music.

If that pace continues for the rest of the year, Tencent will see at least 3.6 trillion yuan ($556 billion) transacted across WeChat Payment in 2016. That would make it almost twice as big as all of PayPal Holdings Inc’s (PYPL.O) $282 billion in transactions in 2015.

Alipay had a total payment volume of $519 billion in 2013, the last year Alibaba or Alipay published such figures.

As for Alipay’s mobile payments, most similar to WeChat Payment, these were 900 billion yuan ($139 billion) in 2013, although Alipay has since grown, as smartphone use has spread in China. A spokeswoman for Ant Financial Services Group, the holding company for Alipay, declined to comment.

Tencent’s revenue for the three months through December grew 45 percent from a year earlier to 30.4 billion yuan, topping the 27.88 billion average forecast of 12 analysts polled by Reuters.

The group’s online advertising revenue more than doubled in the period to 5.7 billion yuan, while net income rose 22 percent to 7.16 billion yuan, its slowest rate in three quarters.