Location Privacy: The Purview of the Rich and Indigent

Samsung trips on quality control in rush to pip Apple

September 5, 2016
0
This post was originally published on this site

I’d just finished parking my car in the covered garage at Reagan National Airport just across the river from Washington, D.C. when I noticed a dark green minivan slowly creeping through the row behind me. The vehicle caught my attention because its driver didn’t appear to be looking for an open spot. What’s more, the van had what looked like two cameras perched atop its roof — one of each side, both pointed down and slightly off to the side.

I had a few hours before my flight boarded, so I delayed my walk to the terminal and cut through several rows of cars to snag a video of the guy moving haltingly through another line of cars. I approached the driver and asked what he was doing. He smiled and tilted the lid on his bolted-down laptop so that I could see the pictures he was taking with the mounted cameras: He was photographing every license plate in the garage (for the record, his plate was a Virginia tag number 36-646L). 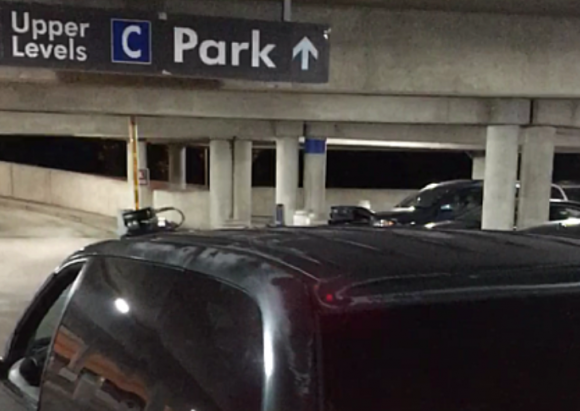 A van at Reagan National Airport equipped with automated license plate readers fixed to the roof.

The man said he was hired by the airport to keep track of the precise location of every car in the lot, explaining that the data is most often used by the airport when passengers returning from a trip forget where they parked their vehicles. I checked with the Metropolitan Washington Airports Authority (MWAA), which manages the garage, and they confirmed the license plate imaging service was handled by a third-party firm called HUB Parking.

I’m accustomed to having my license plate photographed when entering a parking area (Dulles International Airport in Virginia does this), but until that encounter at Reagan National I never considered that this was done manually.

“Reagan National uses this service to assist customers in finding their lost vehicles,” said MWAA spokesperson Kimberly Gibbs. “If the customer remembers their license plate it can be entered into the system to determine what garages and on what aisle their vehicle is parked.”

What does HUB Parking do with the information its clients collect? Ilaria Riva, marketing manager for HUB Parking, says the company does not sell or share the data it collects, and that it is up to the client to decide how that information is stored or shared.

“It is true the solution that HUB provides to our clients may collect data, but HUB does not own the data nor do we have any control over what the customer does with it,” Riva said.

Gibbs said MWAA does not share parking information with outside organizations. But make no mistake: the technology used at Reagan National Airport, known as automated license plate reader or ALPR systems, is already widely deployed by municipalities, police forces and private companies — particularly those in the business of repossessing vehicles from deadbeat owners who don’t pay their bills.

It’s true that people have zero expectation of privacy in public places — and roads and parking garages certainly are public places for the most part. But according to the Electronic Frontier Foundation (EFF), the data collected by ALPR systems can be very revealing, and in many cities ALPR technology is rapidly outpacing the law.

“By matching your car to a particular time, date and location, and then building a database of that information over time, law enforcement can learn where you work and live, what doctor you go to, which religious services you attend, and who your friends are,” the EFF warns.

A 2014 ABC News investigation in Los Angeles found the technology broadly in use by everyone from the local police to repo men. The story notes that there are little or no restrictions on what private companies that collect time- and location-stamped license plate data can do with the information. As a result, they are selling it to insurers, banks, law enforcement and federal agencies.

In Texas, the EFF highlights how state and local law enforcement agencies have free access to ALPR equipment and license plate data maintained by a private company called Vigilant Solutions. In exchange, police cruisers are retrofitted with credit-card machines so that law enforcement officers can take payments for delinquent fines and other charges on the spot — with a 25 percent processing fee tacked on that goes straight to Vigilant. In essence, the driver is paying Vigilant to provide the local cops with the technology used to identify and detain the driver.

“The ‘warrant redemption’ program works like this,” the EFF wrote. “The agency is given no-cost license plate readers as well as free access to LEARN-NVLS, the ALPR data system Vigilant says contains more than 2.8-billion plate scans and is growing by more than 70-million scans a month. This also includes a wide variety of analytical and predictive software tools. Also, the agency is merely licensing the technology; Vigilant can take it back at any time.”

That’s right: Even if the contract between the state and Vigilant ends, the latter gets to keep all of the license plate data collected by the agency, and potentially sell or license the information to other governments or use it for other purposes.

I wanted to write this story not because it’s particularly newsy, but because I was curious about a single event and ended up learning a great deal that I didn’t already know about how pervasive this technology have become.

Yes, we need more transparency about what companies and governments are doing with information collected in public. But here’s the naked truth: None of us should harbor any illusions about maintaining the privacy of our location at any given moment — particularly in public spaces.

As it happens, location privacy is a considerably expensive and difficult goal for most Americans to attain and maintain. Our mobile phones are constantly pinging cell towers, making it simple for mobile providers and law enforcement agencies to get a fix on your location within a few dozen meters.

Obscuring the address of your residence is even harder. If you’ve ever had a mortgage on your home or secured utilities for your residence using your own name, chances are excellent that your name and address are in thousands of databases, and can be found with a free or inexpensive public records search online.

Increasingly, location privacy is the exclusive purview of two groups of Americans: Those who are indigent and/or homeless and those who are wealthy. Only the well-off can afford the substantial costs and many petty inconveniences associated with separating one’s name from their address, vehicle, phone records and other modern niceties that make one easy to track and find.

This entry was posted on Monday, September 5th, 2016 at 9:46 pm and is filed under Other. You can follow any comments to this entry through the RSS 2.0 feed. You can skip to the end and leave a comment. Pinging is currently not allowed.