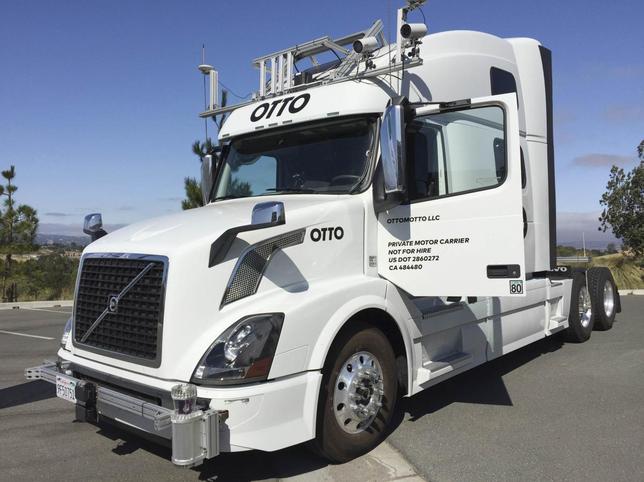 An Autonomous trucking start-up Otto vehicle is shown during an announcing event in Concord, California, U.S. on August 4, 2016.

Self-driving trucking start-up Otto is poised to put its software in the hands of long-haul truckers by the end of this year for testing, its co-founders said on Thursday.

By the end of the year, small owner-operators and larger commercial partners will begin using Otto’s self-driving kit, Levandowski told Reuters at the facility in Concord, north of San Francisco, adding the company has a target of “thousands” of testers by 2017.

Otto has not yet announced when the technology will be ready for sale.

Launched in May, Otto focuses on maximizing the efficiency and safety of long-haul trucks, which spend much of their time on the side of the road as drivers rest.

The Otto trucks are equipped with a series of sensors and mapping technology to allow them to gauge their position on highways and make real-time driving decisions.

It’s unknown just how Otto’s partners will test the trucks, but Otto’s vision allows the driver to leave the wheel, similar to a plane’s “autopilot” system.

Many experts believe full self-driving technology will first roll out in the trucking sector, rather than in passenger cars. Autonomous driving lends itself to highways, where trucks do not have to contend with pedestrians and the myriad distractions of city streets.

Ron said trucks fitted with Otto software can drive more than double their normal daily mileage. “There is a very strong return on investment.”

Since its launch, Otto has received hundreds of emails from mom-and-pop owner-operators around the country asking to use the technology, Ron said.

Otto’s staff has more than doubled to 90 employees from 40 in May, and the self-funded company now has a fleet of five test trucks.