Remote control : LoRa offers a cheaper link to the Internet of Things 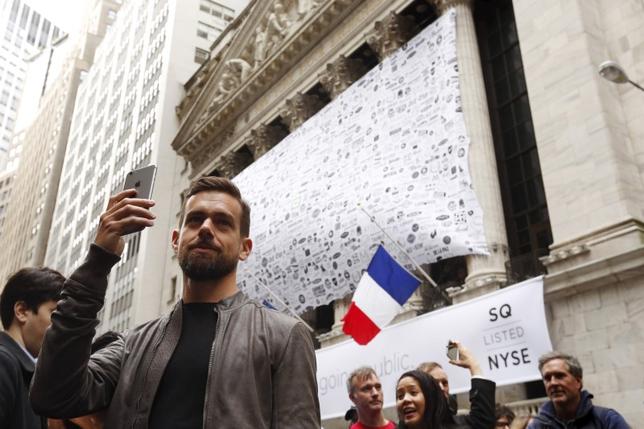 Jack Dorsey, CEO of Square and CEO of Twitter, uses his phone to live cast during an event outside of the New York Stock Exchange to celebrate the IPO of Square Inc., in New York November 19, 2015.

Square stock was up more than 9 percent to $11.40 in after-hours trading following the company’s report of its second-quarter earnings. The closing price was $10.44.

Shares are down steeply from three months ago, when they topped $15, but have rebounded from their initial public offering price of $9.

Square’s revenue reached $438.5 million, up from $310.0 million a year earlier. It processed $12.5 billion in payments, up 42 percent, mostly due to new and larger retailers using Square, the company said.

“Large sellers are joining Square,” Friar said on a call with journalists.

The company’s losses narrowed to $27.3 million from $29.6 million during the same period last year.

On a per share basis, Square lost 8 cents. Research firm FactSet had projected a loss of 3 cents.

Square, which went public in November, facilitates payments between businesses and customers with a credit card reader that turns a mobile phone into a payment terminal. The company also offers services for businesses such as point-of-sale registers, invoice software and loans.

The company made $189 million in loans through Square Capital, its lending arm, a 123 percent increase over last year, despite increased scrutiny over lending practices by tech companies, fueled by troubles at online lending platforms LendingClub and Prosper Marketplace.

Friar attributed the growth to Square’s familiarity with borrowers – the company lends to merchants it has already done business with – and the low cost of the program, which distinguishes it from other lenders.

“We have millions of sellers on our platform,” she said. “So our customer acquisition cost is effectively zero.”

Friar said Square has added another five investors to the loan program. The default rate is around 4 percent.

(Reporting by Heather Somerville in San Francisco and Sweta Singh in Bengaluru; Editing by Sriraj Kalluvila and James Dalgleish)