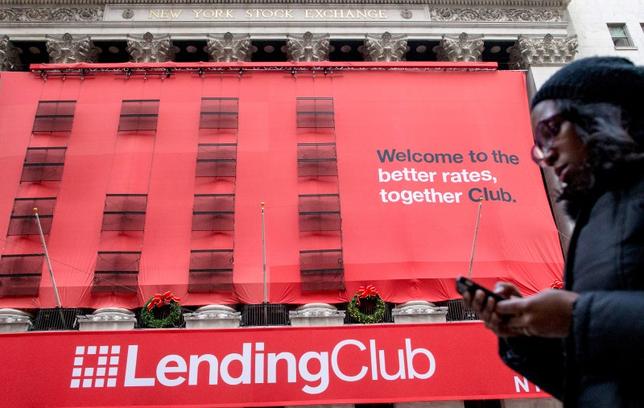 A woman looks at her phone as she passes by a Lending Club banner on the facade of the the New York Stock Exchange December 11, 2014.

Investments into online lending platforms have fallen sharply this year, according to a new report, largely a reaction to the woes at Lending Club and increased regulatory scrutiny that have made investors shy away from the risks.

Equity investments into online lending companies is down about 44 percent, to $2.1 billion from $3.8 billion, for the first half of the year compared to the back half of last year, according to a report out Friday from PitchBook Data Inc, a venture capital database that tracks deals and valuations.

Online lending companies encompass a diverse group of consumer and business lenders that may make direct loans over the web or connect a borrower with a lender, generally an investment bank, and use data and technology to assess a borrower’s risk.

Challenges at Lending Club during the second quarter – when the company’s chief executive resigned following revelations that loans were sold improperly and loan documentation falsified – contributed to investors’ reluctance.

“The primary concerns center around investor appetite, transparency, fraud and diversity of capital,” the report says.

Investments in online lenders have fallen more precipitously than overall tech deals. Investments into venture-backed companies for the first half of this year were down about 3 percent from the previous two quarters, according to Thomson Reuters data.

Online lending startups have raised a total of $12.6 billion across 463 deals since 2011, according PitchBook. Investments peaked in 2015 at $5.2 billion invested across 132 deals.

But many online lending companies are struggling with falling loan volume and losing loan buyers. Some platforms dropped lending standards in an effort to boost loan volume, but that had led to more defaults and delinquencies on payments.

The report cautions that more troubles lay ahead for the sector.

“While we’ve already seen substantial layoffs at high-profile lenders including Avant, Lending Club, CommonBond and Prosper, platforms will also need to raise additional equity, perhaps accepting a drop in valuation in the form of a down round,” the report said.

PitchBook analyst Evan Morris added that online lending companies that can attract investors are raising smaller rounds. While U.S. based companies raised $100 million-plus rounds each of the last two years, the largest round so far this year was a $46.8 million financing for loan startup Payoff.