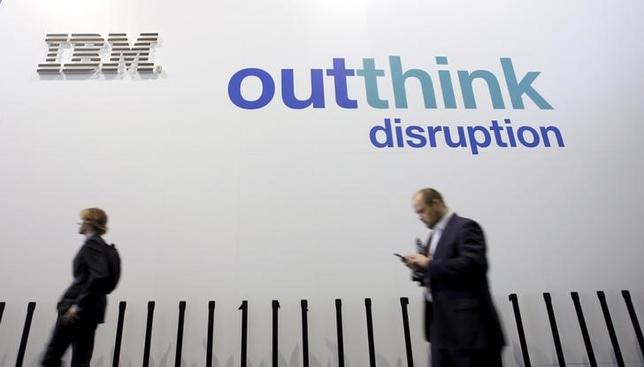 IBM Corp (IBM.N) has given itself a tall order – a full-year profit target many analysts think it will have trouble meeting.

Big Blue has made solid progress as it shifts into high-growth areas such as cloud-based services, and both profit and revenue beat analysts’ expectations in the second quarter.

But the company may have over-promised by sticking to its full-year adjusted earnings forecast of at least $13.50 per share, analysts said, especially after it indicated that profit in the current quarter would come in below estimates.

In order to meet the target, IBM would need to turn in its best sequential improvement in profit in nine years in the fourth quarter, according to Bernstein analyst Toni Sacconaghi.

IBM, which reported a profit of $14.92 per share from continuing operations last year, has missed its full-year target for the last two years.

The company’s shares were down slightly at $159.53 in early afternoon trading on Tuesday, having risen about 16 percent since the start of the year.

Sacconaghi raised his price target to $140, from $135 in April, mainly to reflect the rise in the S&P 500 over the past three months.

On a post-earnings conference call with analysts on Monday, Chief Financial Officer Martin Schroeter indicated IBM would report a third-quarter profit of $3.11 to $3.24 per share.

That means IBM will need to report a profit of between $4.96 and $5.09 per share in the fourth quarter to hit its target.

Analysts on average expect earnings of $3.22 per share for the third quarter and $4.96 in the fourth, according to Thomson Reuters I/B/E/S, which would mean IBM would earn $13.48 per share for year, two cents shy of its target.

Investors and analysts have raised doubts about IBM’s ability to increase revenue growth in its newer cloud-based and analytics businesses at a pace fast enough to make up for falling revenue in its traditional hardware businesses.

Still, at least eight brokerages raised their price targets on IBM’s stock after the company reported its smallest revenue decline in eight quarters.

Citigroup raised the most, to $160 from $140, saying there were “marginally more positives than negatives vs. prior quarter earnings, which were typically disappointing.”

The median price target on the stock is $160 – around where it was trading on Tuesday.