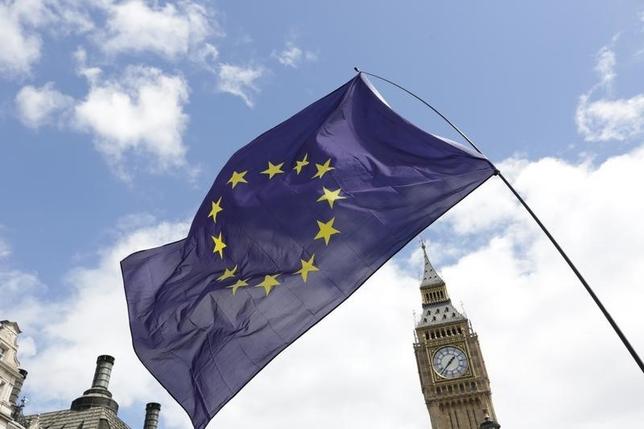 A European Union flag is held in front of the Big Ben clock tower in Parliament Square during a ‘March for Europe’ demonstration against Britain’s decision to leave the European Union, central London, Britain July 2, 2016.

Ten London start-ups have made enquires about moving to Berlin since Britain voted to leave the European Union, business development group Berlin Partner said on Monday.

The start-ups employ between 10-18 people each and are interested in issues such as the price per square meter of commercial property, the labor market situation and the availability of accommodation, Berlin Partner Director Stefan Franzke said.

“The most concrete enquiries are coming from London fintechs (financial technology firms). They are considering a move to Berlin so as not to lose access to the European single market,” Franzke told a news conference.

Along with other European cities, Berlin is jostling for a piece of London’s fintech industry and has stepped up efforts to promote the German capital as an affordable and creative alternative to other centers.

Berlin’s Senator for Economics, Technology and Research Cornelia Yzer has sent hundreds of letters to British firms and has traveled to London Fintech Week to lobby start-up founders.

Berlin Partner has also launched a website in English containing information about how to set up a business here and will open a pop-up lab in London in October to try and woo more companies.

The German capital has around 100 fintech start-ups, including German mobile financial services firm Number26. Affordable living costs, access to talent and the widespread use of English are among its advantages, Franzke said.

He said he expected Berlin to get enquiries not just from UK-based firms but also from foreign start-ups that were originally interested in London but were now looking elsewhere.

Nonetheless, the competition with rival cities that are all hungry to host fintech firms will be tough. Franzke says he sees Amsterdam – which used to be home to a number of global banks and has fast data connections – as Berlin’s biggest competitor.