Facebook’s political influence under a microscope as elections rage

Landing with a bump? Germany’s Rocket falls back to earth 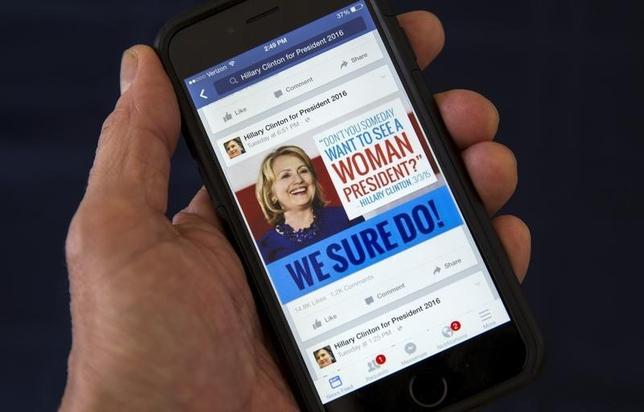 A mobile phone shows a Facebook page promoting Hillary Clinton for president in 2016, in this photo illustration taken April 13, 2015.

As the U.S. presidential campaign heats up, Facebook Inc is going out of its way to show its neutrality – an increasingly urgent matter for the social network as evidence of its power continues to emerge.

Recent studies have shown the site has extraordinary influence. According to research scheduled to be published in August in the Journal of Communication, when people tagged their friends on Facebook in voting reminders, turnout increased by 15 to 24 percent.

During U.S. presidential primary elections this year, a Facebook reminder that informed people when their state’s voter registration deadline was approaching and provided a link helped produce a surge of nearly 650,000 new voter registrations in California alone, according to Secretary of State Alex Padilla.

In the United Kingdom, a Facebook reminder days before the deadline to register to vote on whether the country should exit the European Union led to 186,000 people registering online to vote, according to the government.

“Generally, getting people out to vote could swing a national election,” said Katherine Haenschen, a PhD student at the University of Texas, Austin and author of the upcoming Journal of Communications study.

Facebook is eager to show that its political involvement is limited to seemingly neutral activities such as encouraging voting. The company this week released some of the guidelines that govern its all-important News Feed – the place most people see postings on Facebook – and has pushed back hard against recent allegations of political bias in its “Trending Topics” module.

Her team helps candidates by answering their questions and providing advice, such as how to use Facebook Live and how to increase engagement on their pages.

Some people object even to voter-registration drives. Wikileaks founder Julian Assange, for example, alleged this week that Google and Facebook were trying to encourage a “remain” vote in Britain’s referendum on European Union membership by encouraging voting, asserting that media users are disproportionately youthful and pro-Europe.

A more common complaint is that Facebook and other social networks serve as an echo chamber of ideas and beliefs, as users decide which people and pages they will follow and customize their News Feed.

Facebook customer Tom Steinberg wrote in a post this week -one that quickly spread over Twitter – that he had actively looked on Facebook for people celebrating Britain’s vote to exit the European Union last week but could not find any.

Steinberg, who said he was in favor of remaining in the European Union, urged tech leaders to do more to address the echo chamber on social media.

“To not act on this problem now is tantamount to actively supporting and funding the tearing apart of the fabric of our societies,” Steinberg wrote. “We’re getting countries where one half just doesn’t know anything at all about the other.”

Adam Mosseri, vice president of product management for News Feed, said the team tries to help users find new pages to follow, though he did not cite any specific efforts aimed at encouraging people to diversify their feeds.