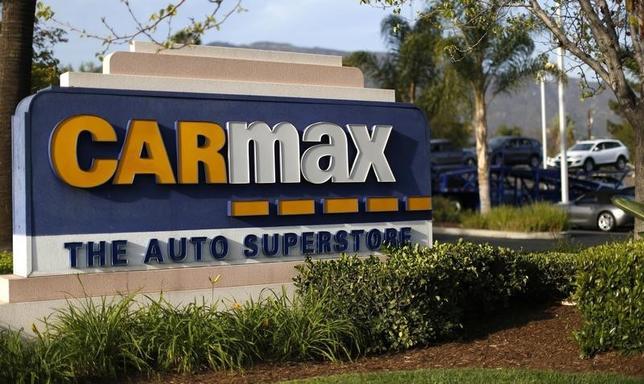 The sign of a CarMax dealership is pictured in Duarte, California March 28, 2014. CarMax, the largest U.S. used car retailer, is expected to report strong fourth-quarter results on April 4.

The company is rolling out an online financing offering this year to customers at 10 stores in the United States to help them pre-qualify for a loan before a store visit, hoping to improve customer conversion rates.

“Many customers want to understand their financing options during their online research process, prior to coming into the store,” CarMax Chief Marketing Officer Jim Lyski told Reuters.

Richmond, Virginia-based CarMax reported on Tuesday lower-than-expected first-quarter revenue and profit as store traffic dropped and comparable unit sales at its used-car stores slowed to a near halt.

The company has been fighting slowing growth in sales largely due to weakness in used-car pricing as new-car sales gain steam.

“Being pre-qualified for financing before the store visit helps build the customer’s confidence …,” CarMax President Bill Nash said on a post-earnings call on Tuesday.

CarMax is late to the online financing party, however.

Also, startups such as Beepi Inc, Carvana and Vroom Inc — that list used cars on an app, provide online financing and facilitates car deliveries — have been denting online traffic to CarMax due to non-availability of an online financing option.

While it may be too early to gauge if CarMax can get enough benefit from the latest offering, Wall Street analysts have broadly welcomed the initiative.

“People want to be able to buy a car similar to how they buy other retail goods. That’s the kind of convenience CarMax needs to offer,” MorningStar analyst David Whiston said, adding that it would lead to higher conversions for CarMax longer term.

CarMax’s shares were down 2.6 percent at $46.87 in late-afternoon trading on Wednesday. Up to Tuesday’s close, the stock had fallen about 11 percent this year, compared with little change in the Dow Jones U.S. Specialty Retailers index .DJUSRS.

(Reporting by Ankit Ajmera in Bengaluru; Editing by Sweta Singh and Sriraj Kalluvila)