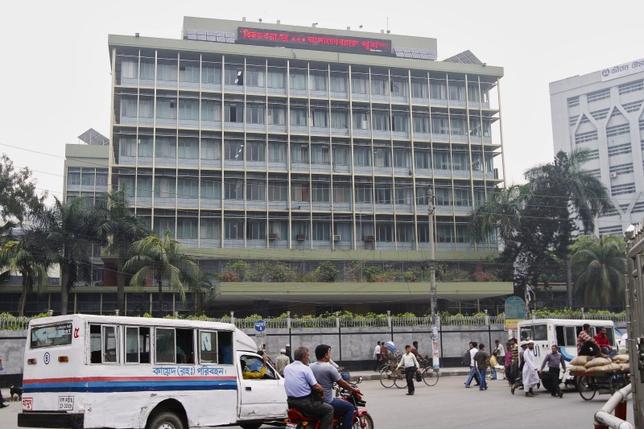 Hours before the Federal Reserve Bank of New York approved four fraudulent requests to send $81 million from a Bangladesh Bank account to cyber thieves, the Fed branch blocked those same requests because they lacked information required to transfer money, according to two people with direct knowledge of the matter.

On the day of the theft in February, the New York Fed initially rejected 35 requests to transfer funds to various overseas accounts, a New York Fed official and a senior Bangladesh Bank official told Reuters. The Fed’s decision to later fulfill a handful of resubmitted requests raises questions about whether it missed red flags.

The New York arm of the U.S. central bank initially denied the transfer requests because they lacked proper formatting for the SWIFT messaging system, the network banks use for international financial transfers, the two officials said.

The Bangladesh Bank official said they lacked the names of correspondent banks, which typically receive wired funds. The Fed rejected the requests, which came from hackers who had broken into the SWIFT network through Bangladesh Bank systems.

Later in the day, however, the cyber thieves resubmitted those 35 requests. On the second try, the messages had the proper formatting, the New York Fed official said. The requests had been authenticated by SWIFT, the first line of defense against fraudulent wire transfers.

Despite the technical compliance, the New York Fed rejected 30 of the requests a second time. But the Fed did approve five requests – for a total of $101 million. Later, one of those five transfers – a $20 million request – was reversed because of a misspelling.

The New York Fed has said it blocked the 30 resubmitted requests because they were flagged for economic sanctions review. Only afterward were they deemed potentially fraudulent.

The Bangladesh Bank official and another source close to the bank said the New York Fed should have rejected all the requests on both the first and second attempts.

The source close to the bank, who also had direct knowledge of the matter, said anomalies in the four transfers that ultimately went through should have raised questions at the New York Fed. They were paid to individual recipients, a rarity for Bangladesh’s central bank, and the false names on the four approved withdrawals also appeared on some of the 30 resubmitted requests rejected by the bank, said the source close to the Bangladesh Bank.

“Of course, we asked the Fed why the repetition of the names did not create red flags,” the source said.

“They are saying they rejected 35 badly submitted ones,” the source said. But when the requests were re-submitted, they “paid 5 of them and stopped 30. Why? They can give no answer.”

The cyber theft from Bangladesh’s central bank – and recent disclosures of other similar fraud attempts – have brought scrutiny on the SWIFT messaging system. SWIFT is a cooperative of global banks formally known as the Society for Worldwide Interbank Financial Telecommunication, and its transaction system was used as a conduit for one of the largest cyber bank heists in history.

In the United States, a congressional committee has launched a probe into the New York Fed’s role in the bank heist. The Bangladeshi central bank might seek compensation for the funds from the Federal Reserve, and Bangladesh Bank police have said that recent installation of a new SWIFT settlement system at the bank last fall may have provided thieves an opportunity to gain access to the bank’s SWIFT servers.

The New York Fed’s reviews of payment requests that come over the SWIFT system are focused chiefly on guarding against money laundering and transfers to people and entities that are under U.S. government sanctions, Fed officials have said. But requests often also are temporarily halted to fix typos and other formatting problems.

The Fed branch has said its clients, including Bangladesh Bank, and SWIFT have primary responsibility for preventing unauthorized transfers.

Fed employees queried Bangladesh Bank about the purpose of the payments requested on Feb. 4 and again on Feb. 5, according to a letter to congresswoman Carolyn Maloney (D-NY) by New York Fed General Counsel Thomas Baxter.

The four transfers totaling $81 million went to accounts in the Philippines. The money wound up with casinos and casino agents and remains missing. An attempt to transfer $20 million to a foundation in Sri Lanka was reversed because the word “foundation” was misspelled.

The source close to Bangladesh Bank said questions about the anomalies in the approved requests were discussed at a meeting in Basel last month between New York Fed President William Dudley, Bangladesh Bank Governor Fazle Kabir and representatives from SWIFT.

Rep. Maloney and Tom Carper, the top Democrat on the Senate Homeland Security Committee, both have made inquiries to the New York Fed.

The House Science Committee informed the New York Fed in a letter this week that it is launching a probe into its handling of the transfer requests. The committee plans to examine the New York Fed’s response to the heist, the oversight of SWIFT, and whether additional measures are needed to address vulnerabilities to cyber attacks.

SWIFT, which has come under scrutiny after the Bangladesh Bank heist and cyber attacks in at least three other cases, plans a new program to improve security and also wants banks to “drastically” improve information sharing.