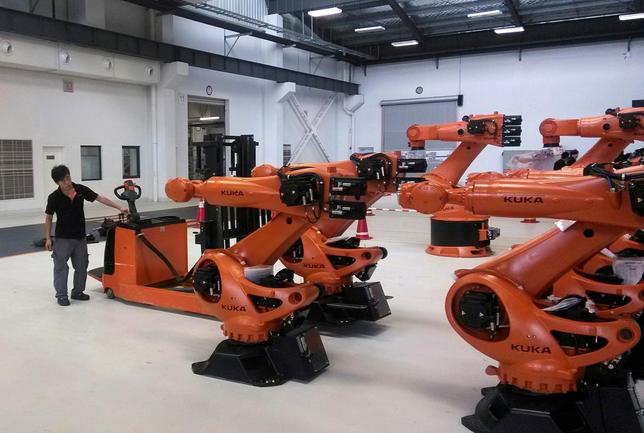 A staff member stands next to robots at a plant of Kuka Robotics in Shanghai, China August 13, 2014.

Kuka is the latest and biggest German industrial technology group to be targeted by a Chinese buyer as the world’s second-largest economy makes the transition from a low-cost manufacturer into a high-tech industrial hub.

“There are efforts to formulate an alternative offer. Whether that materializes, we will see,” Gabriel told reporters in Berlin on Wednesday, adding that there was no “pact” on agreeing a deal.

Government sources have said Berlin will examine how critical Kuka’s technology is for the digitization of industry, an economic priority for Chancellor Angela Merkel’s government.

Citing government and industry sources, Germany’s Sueddeutsche Zeitung said on Wednesday that Gabriel wants to forge an alliance of German or Europe firms to prevent a sale to the Chinese company.

German industrial group Siemens (SIEGn.DE) had considered a counterbid for Kuka, but quickly dismissed the idea as too expensive, sources familiar with the matter have told Reuters.

China’s Shanghai Electric (601727.SS) has in the past also considered buying Kuka but shied away from making a move, two people familiar with the matter said. Shanghai Electric was not immediately available for comment.

One banker familiar with the sector said big industry players in Europe would not be lured into a rival bid as the price was too high and the path to control of the company unclear.

Unlisted mechanical engineering group Voith holds 25.1 percent of the shares in Kuka, allowing it to block strategic decisions. The banker could not see why Voith would pay up to buy Kuka outright when Midea will not have full control anyway.

Midea will not be able to control Kuka fully unless Voith and another investor, Loh, sell their stakes or strike an agreement with the Chinese.

A second banker said Swiss engineering group ABB (ABBN.S) could be interested in Kuka in principle but that the price is now too high. A spokesman for ABB declined to comment on what he said was market speculation.

Despite its concerns about losing German technology to China, the ruling coalition of Merkel’s conservatives and Gabriel’s Social Democrats (SPD) does not like to meddle in takeovers.