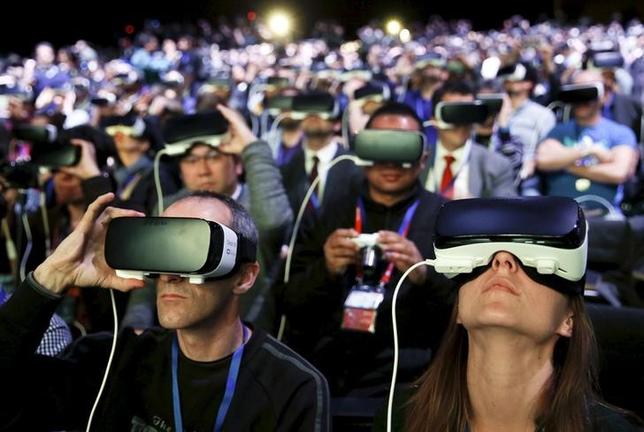 People wear Samsung Gear VR devices as they attend the launching ceremony of the new Samsung S7 and S7 edge smartphones during the Mobile World Congress in Barcelona, Spain, February 21, 2016.

A growing number of U.S. companies are counting on virtual reality for real profits.

With growth hard to come by amid the lethargic economy, companies ranging from snowmobile manufacturers to furniture sellers are incorporating virtual reality that so far has mostly been found in video games. Their bet: that the trendy headset-based technology can help them build sales and cut costs.

Theme park operator Six Flags Entertainment Corp (SIX.N) is outfitting riders on some of its aging roller coasters with Samsung VR headsets, allowing the company to brand the rides as brand-new without having to build costly new attractions.

Snowmobile manufacturer Arctic Cat Inc (ACAT.O) has developed virtual reality rides that customers can use to try out new models at dealerships, while eBay Inc’s (EBAY.O) StubHub is testing technology that allows fans to check out the view from different seats before buying tickets.

In the most recent round of corporate earnings reports, some 38 companies – including the New York Times Co (NYT.N), GoPro Inc (GPRO.O), and furniture-seller Wayfair Inc (W.N) – highlighted virtual reality as a part of their business plans.

That was a 375 percent jump from the 8 that did so at this time last year, according to a Reuters analysis of earnings calls transcripts. Nearly all were either consumer or technology companies, suggesting that virtual reality technology has a ways to go before becoming mainstream.

Yet for all of the enthusiasm, there is little evidence that virtual reality can deliver substantial growth.

“It is complementary to places like Six Flags, I would suspect, but not a game changer,” said Brain Smoluch, a principal at Hood River Capital Management who owns shares in Himax Technologies Inc (HIMX.O), which makes semiconductors used in virtual reality displays.

There are few pure plays for investors who want to buy into virtual reality.

Facebook Inc (FB.O), which paid $2 billion for its Oculus virtual reality division in 2014 and began shipping its first $599 Oculus Rift headsets in March, has the best-known virtual reality head gear, though other well-known companies including Google’s parent Alphabet Inc (GOOGL.O) and Apple Inc (AAPL.O) are rumored to be working on high-powered headsets of their own. Neither company returned requests to comment.

Virtual reality is such a small part of Facebook’s business that most analysts do not break out Oculus in their revenue or earnings estimates. Nor did Facebook give any numbers on how many Oculus headsets it expects to sell on its most recent earnings call.

“This is very early and we don’t expect VR to take off as a mainstream success right away … but eventually we believe that VR is going to be the next big computing platform and we’re making the investments necessary to lead the way there,” Chief Executive Mark Zuckerberg said.

Some analysts, however, already are seeing a boost to the companies they cover.

“I don’t think it’s possible to break out (the benefit of VR technology) with any sort of precision,” said Tyler Batory, an analyst at Janney Montgomery Scott who covers Six Flags. “But I can tell you that I think they are going to report record results this year because their growth rate is accelerating, and the growth rate wouldn’t be accelerating if they didn’t have it.”

Outfitting riders with VR headsets is much cheaper than building an entirely new roller coaster, he added, while only requiring three additional employees – two to disinfect the headsets after each ride and one to make sure riders have them on correctly.

As a result, he’s been buying shares of Facebook, whose Oculus technology could become the industry standard.

“It’s cost-effective, it’s efficient, and it helps you avoid some of the problems that come with adding new employees,” he said.