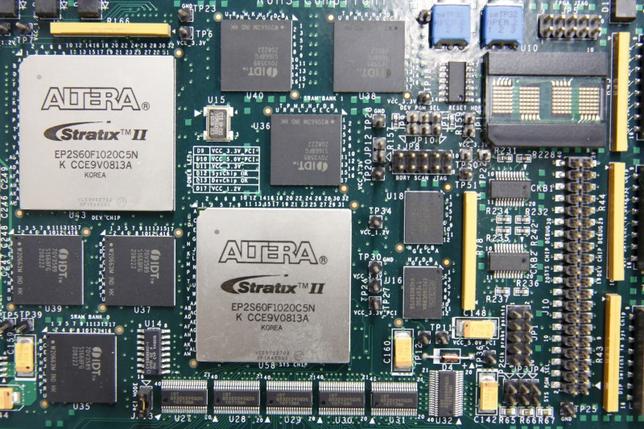 An interface board bearing CPU (silver) and semiconductors (black) is placed on a researcher’s desk at Tsinghua Unigroup research centre in Beijing, China, February 29, 2016.

The review and final decision on Tsinghua’s partial acquisitions of chip testing and packaging firms Powertech Technology Inc and ChipMOS Technologies Inc will be a test for the new government of President Tsai Ing-wen, which takes office on Friday. Tsai had earlier slammed the plans as a “huge threat” for Taiwan.

“We have asked for more information, both involving basic and key issues,” a representative of the island’s Investment Commission, which reviews major inbound and outbound investments involving Taiwanese companies, told Reuters, without elaborating on what the issues were.

Tsinghua Unigroup submitted its applications about a month ago but the review process didn’t begin until after Siliconware Precision Industries Co (SPIL), a third Taiwanese chip test and packager, announced it was terminating a similar deal with the Chinese investor at the end of April, people familiar with the deals said.

Following civil war in China, Nationalist forces fled in 1949 to Taiwan which has been self-ruled ever since. But China regards it as a wayward province to be taken back by force if necessary, fuelling fears among Taiwanese about Chinese influence in the island’s main industries.

Tsinghua Unigroup did not immediately reply to an emailed request for comments.