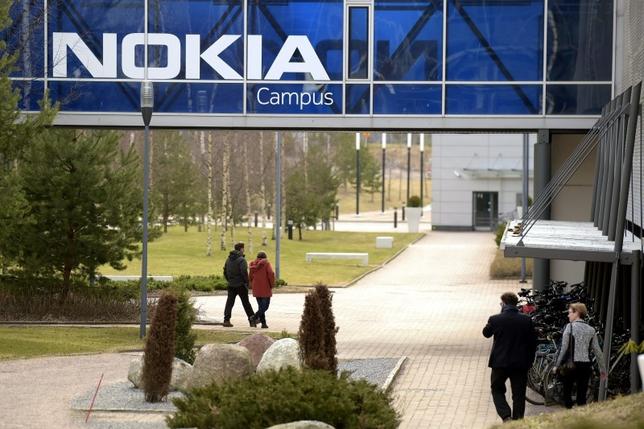 The Nokia headquarters is seen in Espoo, Finland April 6, 2016.

Nokia’s (NOKIA.HE) net sales of telecoms equipment fell more than expected in the first quarter and the Finnish company warned earnings in its mainstay business would decline this year due to weakening demand for mobile gear in key markets.

In its first unified earnings report since taking control of rival Alcatel-Lucent in January, Nokia also nudged up its cost-cutting target for the merger, saying it was now seeking savings of “above” 900 million euros ($1 billion) in the course of 2018, compared with “approximately” 900 million euros previously.

Net sales at the combined networks business dropped 8 percent in the first quarter from a year ago to 5.18 billion euros, Nokia said on Tuesday, missing analysts’ average forecast of 5.51 billion in a Reuters poll.

Nokia said it expected networks sales in the full year to decline due to weak investing by mobile operators as well as its focus on integrating Alcatel-Lucent.

“While our revenue decline was disappointing, the shortfall was largely driven by mobile networks, where the challenging environment is not a surprise,” Chief Executive Rajeev Suri said.

First-quarter net sales fell 17 percent in North America, the company’s largest market, while declining 11 percent in the Middle East, 6 percent in Asia-Pacific and 5 percent in China.

It forecast a full-year operating margin of above 7 percent for the networks business, compared with analysts’ average estimate of 9.4 percent and 6.5 percent in the first quarter.

Analysts expect the margin to rise to 11.6 percent by 2018 once the cost cuts from the merger have been completed.

“The full-year guidance is a slight disappointment. The market remains difficult, which seems to add pressure to step up their cost-savings program,” said Mikael Rautanen, analyst at Inderes Equity Research.

Nokia acquired Alcatel in a 15.6 billion euro all-stock deal to help the Finnish company more broadly compete with Sweden’s Ericsson (ERICb.ST) and China’s Huawei [HWT.UL] in a market with limited growth and pressure on prices.

Rautanen said the timing of the deal looked good as Alcatel-Lucent’s fixed-line equipment business performed much better than Nokia’s original business in the first quarter.

Nokia started the cost-cutting program last month, saying it was planning to axe thousands of jobs worldwide, including 1,400 in Germany and 1,300 in Finland.