April 29, 2016
1
This post was originally published on this site

Skimming attacks on ATMs increased at an alarming rate last year for both American and European banks and their customers, according to recent stats collected by fraud trackers. The trend appears to be continuing into 2016, with outbreaks of skimming activity visiting a much broader swath of the United States than in years past. 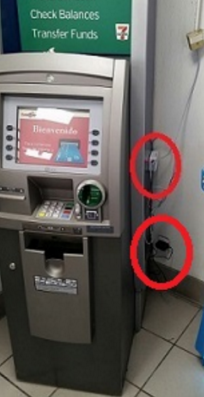 “The number of ATM compromises in 2015 was the highest ever recorded by the FICO Card Alert Service, which monitors hundreds of thousands of ATMs in the US,” the company said. “Criminal activity was highest at non-bank ATMs, such as those in convenience stores, where 10 times as many machines were compromised as in 2014.”

While 2014 saw skimming attacks targeting mainly banks in big cities on the east and west coasts of the United States, last year’s skimming attacks were far more spread out across the country, the FICO report noted.

Earlier this year, I published a post about skimming attacks targeting non-bank ATMs using hidden cameras and skimming devices plugged into the ATM network cables to intercept customer card data. The skimmer pictured in that story was at a 7-Eleven convenience store.

Since that story ran I’ve heard from multiple banking industry sources who said they have seen a spike in ATM fraud targeting cash machines in 7-Elevens and other convenience stores, and that the commonality among the machines is that they are all operated by ATM giant Cardtronics (machines in 7-Eleven locations made up for 17.5 percent of Cardtronics’ revenue last year, according to this report at ATM Marketplace).

Some financial institutions are taking dramatic steps to head off skimming activity. Trailhead Credit Union in Portland, Ore., for example, has posted a notice to customers atop its Web site, stating:

“ALERT: Until further notice, we have turned off ATM capabilities at all 7-11 ATMs due to recent fraudulent activity. Please use our ATM locator for other locations. We are sorry for the inconvenience.” 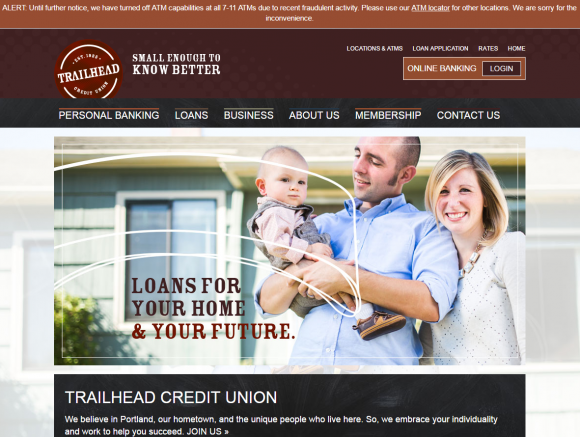 7-Eleven did not respond to requests for comment. Cardtronics said it wasn’t aware of any banks blocking withdrawals across the board at 7-11 stores or at Cardtronics machines.

“While Cardtronics is aware that a single financial institution [Xceed Financial Credit Union] temporarily restricted ATM access late in 2015, it soon thereafter restored full ATM access to its account holders,” the company said in a statement. “As the largest ATM services provider, Cardtronics has a long history of executing a layered security strategy and implementing innovative security enhancements at our ATMs. As criminals modify their attack, Cardtronics always has and always will aggressively respond, reactively and proactively, with innovation to address these instances.”

A bit closer to home for this author, on April 22 FICO pushed an alert to its customers and partners warning about “a recent and dramatic increase in skimming fraud perpetrated at a chain of discount supercenters point-of-sale (POS) terminals,” in an around the Washington, D.C. area, including Frederick, Ellicott City and Mt. Airy in Maryland, and in Fredricksburg, Va.

“As this fraud activity has appeared and progressed suddenly, it is likely that sites in other cities and other geographic areas will be targeted by organized criminal groups,” the organization cautioned.

Banks in Europe also enjoyed an increase in skimming attacks of all kinds last year. According to statistics shared by the European ATM Security Team (EAST), during 2015 there were 18,738 skimming attacks reported against European ATMs. That’s a 19% increase from the previous year and equates to 51 attacks per 1000 ATMs over the period.

EAST’s report further breaks down the skimming activity by specialization. For example, there were at least 2,657 cases in which a thief tried to blow up or otherwise physically force his way into the cash machine. “This total also includes data from solid explosive and explosive gas attacks. This is a 34% increase from 2014 and equates to 7.2 attacks per 1000 ATMs over the period.”

EAST also tracked 15 malware incidents reported against European ATMs in 2015.  All of them were ‘cash out’ or ‘jackpotting’ attacks. According to EAST, this is a 71% decrease from 2014. 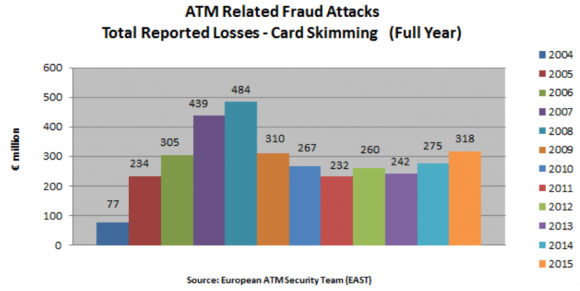 As I’ve noted in countless skimmer stories here, the simplest way to protect yourself from ATM skimming is to cover your hand when entering your PIN. That’s because most skimmers rely on hidden cameras to steal the victim’s PIN.

Interestingly, a stat in Verizon‘s new Data Breach Investigations Report released this week bears this out: According to Verizon, in over 90 percent of the breaches in the report last year involving skimmers used a tiny hidden camera to steal the PIN.

The Verizon report also offers this advice about ATM safety: Trust your gut. “If you think that something looks odd or out of place, don’t use it. While it is increasingly difficult to find signs of tampering, it is not impossible. If you think a device may have been tampered with, move on to another location, after reporting to the merchant or bank staff.”

For more on ATM skimmers and other skimming devices, check out my series All About Skimmers.

This entry was posted on Friday, April 29th, 2016 at 11:42 am and is filed under All About Skimmers. You can follow any comments to this entry through the RSS 2.0 feed. You can skip to the end and leave a comment. Pinging is currently not allowed.