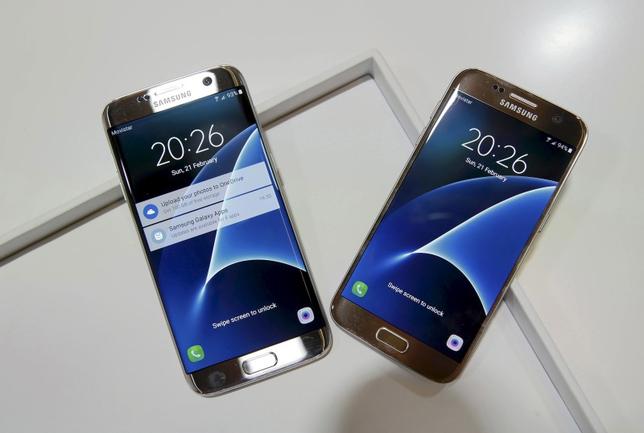 New Samsung S7 (R) and S7 edge smartphones are displayed after their unveiling ceremony at the Mobile World Congress in Barcelona, Spain, February 21, 2016.

Tech giant Samsung Electronics Co Ltd (005930.KS) on Thursday tipped a pickup in second-quarter profits after reporting a 12 percent earnings gain in January-March on the back of “robust” sales of its Galaxy S7 smartphones.

The mobile division was the South Korean firm’s biggest earner for the first time since the second quarter of 2014, in a sign the world’s top smartphone maker has righted itself after two years of shrinking profits and market share losses.

“In the second quarter we expect our solid performance to continue,” Samsung investor relations chief Robert Yi said during a post-earnings conference call, adding the firm was “cautiously optimistic” that operating profit would increase quarter-on-quarter.

Samsung’s January-March operating profit was 6.7 trillion won ($5.84 billion), slightly above with its earlier estimate of 6.6 trillion won. Revenue rose 5.7 percent to 49.8 trillion won, compared with its guidance for 49 trillion won.

Profit for the smartphone division jumped 42 percent from a year earlier to 3.9 trillion won, an almost two-year high. Samsung said it expected further sales growth for its Galaxy S7 devices in the second quarter as well as from its mid-to-low tier products, flagging improved profitability on lower-end models such as the Galaxy A and J series.

The firm expects second-quarter mobile shipments, including non-smartphones, to fall slightly from 92 million units in January-March, partly as older smartphone models are phased out. Average sales prices will rise slightly, however.

Market researcher TrendForce says combined shipments for flat- and curved-screen S7 models will reach 52 million by the year-end, surpassing the previous record of 47 million sets by the Galaxy S4.

Operating profit for the chip division fell 6 percent to 2.6 trillion won, undercut by price declines for memory chips stemming from slower demand for products such as personal computers.

The firm also said it will buy back and cancel 2 trillion won of its own shares in the third installment of its 11.3 trillion won buyback plan.

Yi said during the conference call Samsung did not plan to implement quarterly dividends in 2016.