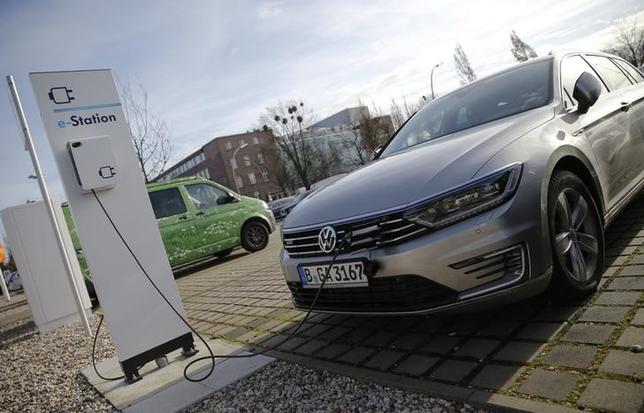 An electric Volkswagen Passat car is pictured at charging station at a VW dealer in Berlin, Germany, February 2, 2016.

Germany will offer incentives for buyers of electric cars worth about 1 billion euros ($1.13 billion) to stoke consumer interest in battery cars as it struggles to meet a target of bringing 1 million of them on to its roads by the end of the decade.

The incentives, to be shared equally between the government and automakers, may yield 400,000 electric-car sales in coming years as part of a program to run on a first-come, first-served basis, Transport Minister Alexander Dobrindt said on Wednesday.

Under the plans, agreed early on Wednesday between government ministers and representatives of Volkswagen (VOWG_p.DE), Daimler and BMW, electric car buyers will get a 4,000 euro incentive while buyers of plug-in hybrid vehicles will get a premium of 3,000 euros.

“With this, I believe we will be able to give a boost to quickly move the number of vehicle (sales) to a considerable level,” Finance Minister Wolfgang Schaeuble said, adding that cars with a net price tag of more than 60,000 euros would not benefit from the scheme.

The program includes 300 million euros of spending on charging stations and could start as early as May, Schaeuble said, adding that the government was considering further steps like tax incentives to make electric cars even more attractive.

Auto industry executives have repeatedly urged Germany to introduce incentives to boost demand for electric cars if it is to retain its leading edge as an automotive market. Only about 50,000 purely battery-powered vehicles and plug-in hybrids are currently on the roads of Europe’s biggest auto market.

While the Volkswagen emissions scandal has helped expose the drawbacks of Europe’s heavy reliance on diesel cars, countries such as Norway and the Netherlands have become a model of how to get consumers to embrace electric vehicles despite still high purchasing costs and range limitations.