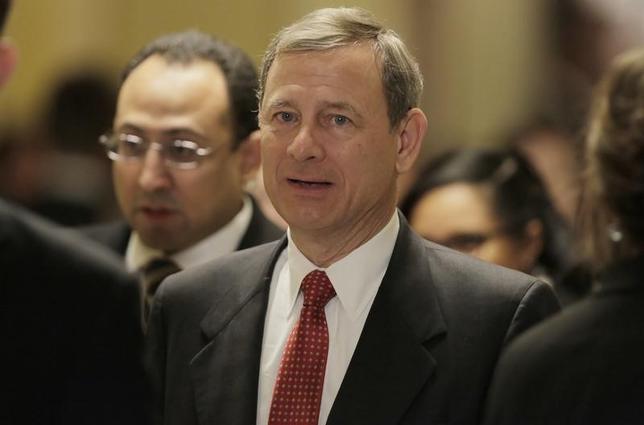 U.S. Chief Justice John Roberts on Monday described as bizarre the legal process used by companies to challenge competitors’ patents as the Supreme Court heard a case involving a vehicle speedometer that alerts drivers if they are driving too quickly.

The eight justices heard an appeal filed by Cuozzo Speed Technologies LLC, whose speedometer patent was invalidated in a U.S. Patent and Trademark Office review board procedure after being challenged by GPS device maker Garmin Ltd in 2012.

The issue before the justices during a one-hour argument in the case was whether the U.S. government has made it too easy for companies to pursue challenges to the patents of other companies.

New Jersey-based Cuozzo challenged the board’s action in federal court, and an appeals court last year upheld the agency’s action. Cuozzo then asked the Supreme Court to reverse the appellate decision. Garmin is no longer involved in the case.

Roberts was the most outspoken critic among the eight justices of the current system in which companies can adopt a dual-track strategy by challenging patents simultaneously in federal court and through the agency review board.

Roberts described the system as a “bizarre way to … decide a legal question” and a “very extraordinary animal in legal culture to have two different proceedings addressing the same question.”

Justice Stephen Breyer appeared more sympathetic to the patent office. He said the 2011 law that set up the review board procedure may have intended to counter criticism that the patent office issues “too many patents that shouldn’t have been issued in the first place.”

So-called patent trolls, entities that hold patents only for the purpose of suing firms seeking to develop new products, have benefited from that generosity.

Breyer indicated that the patent office views the law as allowing a second bite at the question of whether a patent should have been issued. Breyer called it a “partial-Groundhog Day statute,” referring to the 1993 film “Groundhog Day” in which Bill Murray’s character repeatedly re-lives the same day.

Companies that are frequent targets of patent suits, including Apple Inc and Google Inc, have turned to the patent office procedure, known as “inter partes review” (IPR), to try to fight off patent challenges.

Cuozzo told the justices that in nearly 85 percent of cases some or all of the patents challenged were canceled.

A ruling is due by the end of June.