The U.S. Justice Department on Friday said it would keep fighting to force Apple Inc to open an iPhone in a New York drug case, continuing its controversial effort to require Apple and other tech companies to help law enforcement authorities circumvent encryption.

Just two weeks ago, the government dropped its effort to require Apple to crack an iPhone used by one of the shooters in the December attacks in San Bernardino, California, saying it had unlocked the phone without Apple’s help.

Some observers thought the government would back away from the New York case too, since the suspect has already pleaded guilty. But in a letter filed in federal court in Brooklyn, New York, the Justice Department said, “The government continues to require Apple’s assistance in accessing the data that it is authorized to search by warrant.”

An Apple attorney said Friday the company was disappointed but not surprised that the government would continue to fight in New York after giving up in California.

He said the appeal belied the FBI’s claim that the San Bernardino case was about a single phone and the need to stop future terror acts.

Apple, with the strong support of most of the technology industry, argues that requiring it to circumvent the encryption in its own products would inevitability open the door for hackers and foreign spies and undermine security for everyone. The company has said it is willing to take the issue to the Supreme Court.

The phones in the two cases have different security features, with the New York phone running an earlier version of the iPhone operating software. The director of the Federal Bureau of Investigation, James Comey, who is leading the battle against Apple, said Thursday that the method used on the San Bernardino phone would not work on other models.

But the New York phone is much easier for Apple to break into. Apple has acknowledged it could get data from the drug dealer’s phone without crafting special software, as it would have had to do with the San Bernardino phone.

Apple helped law enforcement with earlier iPhones on some 70 occasions, according to court documents, and it objected to the order in the New York case only after it was invited to do so last fall by U.S. Magistrate Judge James Orenstein.

Since then, Apple has declined to comply with such orders without a fight, a person close to the company said. In a case that came to light Friday, a Boston judge had ordered Apple to cooperate in a gang case. Apple also objected there, and the Justice Department said it has not yet decided whether to push again to force its assistance.

In a ruling issued on Feb. 29, Orenstein came down firmly on Apple’s side, rejecting the idea that an old law known as the All Writs Act gave judges the power to order Apple’s help. That judge, Apple and the FBI have all said the balance between encryption and law enforcement access should be struck by Congress, and one such proposal is nearing formal introduction by the leaders of the Senate intelligence committee.

The Justice Department announcement Friday, however, showed it will continue to fight in the courts as well.

Jill Bronfman, director of the Privacy and Technology Project at University of California Hastings College of the Law, questioned whether the facts involved in the New York case would make a strong test case over encryption. While extracting data from the phone in the New York case would be an easier technical feat for Apple, the facts in the case are far less compelling, she said.

“If you want to do a balancing test and you’ve got terrorism on one side of the scale, that’s a very heavy weight,” she said. “We’ll see how the request is balanced when we have drugs on the other side.”

Apple is scheduled to file papers in opposition of the Justice Department’s appeal by April 15.

In its appeal, the Apple lawyer said the company would try the same thing it was planning in California: demanding that government show it had tried all possible alternative means of getting into the phone.

That could force the FBI to reveal closely held details of its efforts to break into phones.

Federal law enforcement officials declined to say whether they were looking into having third parties unlock the phone in the New York case.

The phone in the Brooklyn case belonged to Jun Feng, who has pleaded guilty to participation in a methamphetamine distribution conspiracy. The Justice Department is seeking to unlock Feng’s phone to find other conspirators. 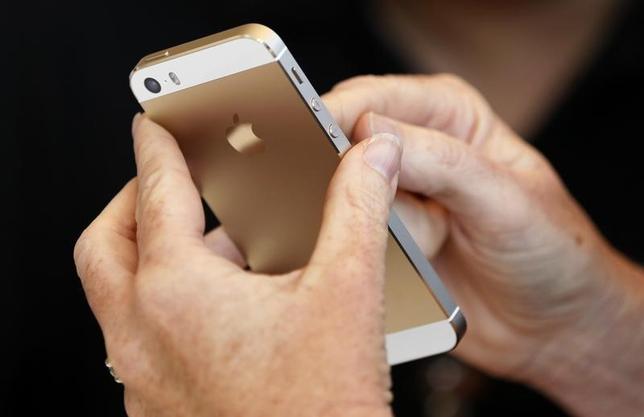 The gold colored version of the new iPhone 5S is seen after Apple Inc’s media event in Cupertino, California September 10, 2013.